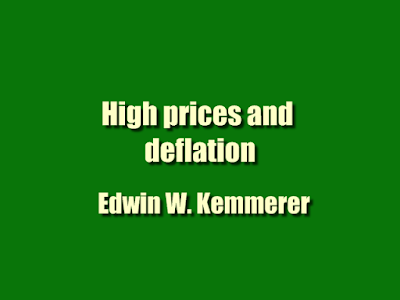 "This book represents a revision and enlargement of three articles published during the winter of 1919-1920 by the Bankers' statistics corporation of New York City. The subjects of the three articles were respectively Inflation, High prices, and Deflation."--Pref. note
The six years from 1913 to 1919 are striking ones from many points of view. During this period we saw the fires of the world's greatest war smoulder, break into flames and die away again; we witnessed the overthrow of great nations and the repartition of Europe along new lines; countries that had not existed prior to 1913 as national units sprang into being and vast armies of men were drawn from factories, desks and fields, trained and sent to battle from which many never returned.
Coincident with these changes, problems of the first importance have developed in our economic life, problems which affect each of us today in a very vital manner and which demand intelligent study and correct solution. Chief among these problems is that of the high cost of living, its causes and effects, and the question of what is to be done to relieve the situation as it now exists. An enlightened public opinion on this whole subject is an urgent national need.
The increase in general prices throughout the world is the outstanding economic phenomenon of the period included between 1913 and 1919. In Australasia that rise was about 100 per cent; in countries having a gold stand- (vii) ard still, such as the Scandinavian nations, Japan and the United States, it has varied from 150 per cent to 250 per cent, while in paper money countries, like Russia and Austria, it has amounted to several thousand per cent.
It is evident that when the price level increases, the value of the dollar declines. To double the price level is to cut the dollar in half. Inflation, followed by the inevitable depreciation of money, has varied during these six years in different countries. Even in the same country different kinds of prices, as, for example, wholesale prices, retail prices, wages and prices for public services responded with different degrees of promptness and at different rates to inflationary forces. The same thing may be said of the various commodities within each of these groups.
Edwin Walter Kemmerer was an American economist, who became famous as an economic adviser to foreign governments in many countries, promoting plans based on strong currencies, the gold standard, central banks, and balanced budgets
Download PDF book