Hallucinations and illusions, a study of the fallacies of perception 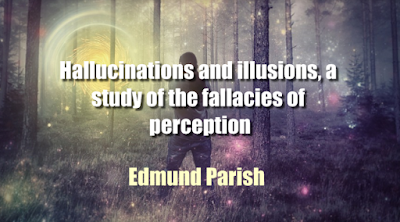 This book originated in an examination, upon which I was recently engaged, of the " International Census of Waking Hallucinations in the Sane." While comparing for this purpose all the works accessible to me on hallucination and fallacious perception in general, I was struck by the fact that the writers, and especially the more modern writers, treat for the most part only of single aspects of the subject, such as fallacies of perception occurring under morbid conditions, or in dreams, throwing at most but a casual glance at related phenomena.
The waking hallucinations of healthy persons are more or less completely ignored by them, and this neglect is natural enough if we consider how meagre are all the accounts of such phenomena hitherto published. But now that the inquiry originated by the International Congress of Psychology at its meeting in Paris in 1889 has furnished ample and trustworthy data, it seems possible to bring these particular phenomena of fallacious perception into line with the rest Moreover, as this subject has already been dealt with at the Congress held in. London in 1892, and will doubtless form part of the proceedings of sub-sequent congresses, it seems to me that it may not be superfluous as a preliminary inquiry to review the whole field of sensory delusion, to indicate its relations to normal or "objective" perception, and to elucidate the common organic principle which, under whatever diversity of conditions, underlies alike normal and fallacious perception. In the course of such an undertaking, it is impossible to avoid supplementing by hypotheses our scanty knowledge of physiology and the localisation of cerebral functions.
I have endeavoured, however, where practicable, to make good this deficiency, and have sought by an exhaustive study of the German, English, French, and American literature of the subject to establish my conclusions on a thoroughly broad basis. In doing this I have not depended on the more recent cases only, but have carried my researches as far back as the early part of the century, and thus rescued from oblivion many for- gotten observations.
On the other hand, the collected results of the " International Census of Waking Hallucinations in the Sane" furnish fresh material not yet critically handled or presented in literary form; at all events, a short note on the subject in F. C. Miiller's Hand- buck der Neurasthenie is all I have been able to find. The statistics in question, with the exception of those of the Munich Collection, have, it is true, been sub- mitted to the London Congress, but they have not hitherto been published. I take this opportunity to thank the Society for Psychical Research and the Munich Psychologische Gesellschaft for the permission which they have kindly granted me to publish them here. Indeed, the completion of my work, which grew out of a series of lectures delivered before the Munich section of the Gesellschaft fur Psychologische Forschung, has been rendered possible only by the sympathy and interest which the members of that society accorded to me. I feel indebted to them all, but more especially to Baron von Schrenck- Notzing (Munich), Dr F. C. Miiller (Alexandersbad), Dr Max Dessoir (Berlin), and Dr Burckhardt-Prefargier, for the constant stimulus of their sympathetic interest, and the help they have kindly given me in collecting material and in reading the proof-sheets.
Download PDF book