Gentlemen errant; being the journeys and adventures 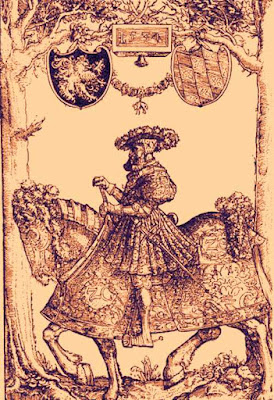 being the journeys and adventures of four noblemen in Europe during the fifteenth and sixteenth centuries.
Contents:
Introduction.-Chronological table.-The Bohemian Ulysses.-A master of war.-The adventures of a Palsgrave.-An epic of debts.-Illustrative notes.-List of books consulted or quoted frequently in the notes
Excerpt from  Nina Cust's introduction:
In the fifteenth and sixteenth centuries, Europe was still her own chief school and training ground. The Voyagers, a great and gallant company, were already opening both the new gates of the West and the ancient gates of the East to the desire and need of man; and their labours and perils were to bring to later generations, if not the Golden Age and Golden World of their dreams, at the least a spacious earth and a limitless horizon. But, in the days of the Renaissance, the small old continent of Europe still bound the skies of most of her children.
It was by dwelling in Europe's courts, by fighting in Europe's quarrels and by praying before Europe's shrines, that the Complete Gentleman of every nation left ' shapeless idleness ' and graduated in the arts of life. Thus he perfected his chivalry and thus he practised his religion; thus, if poor, he earned his livelihood and thus, if rich, he spent his patrimony; and, if of high estate, he furthered thus either his master's business or his own. In this way, too, he won strange and chequered wisdom, and in this way, he not seldom lost such scanty book-learning as he might chance to possess. It is probable, however, that the knowledge of men and things which he thus arduously achieved was of more value to him in his uneasy career than the reading of many books.
Of all men, says Coryat (and for once he is both eloquent and wise), he may be most fitly promoted to the glorious honours of public affairs who, ' having before travelled much and long with Ulysses, hath seen the divers manners and rites and the beautiful cities of many people.' This, then, is the fashion in which the four noblemen of these chronicles learned their lesson of living; and this lesson it is — quick with the tumult and colour of the time — that renders their exploits worth the remembrance. Their annals are chiefly occupied, it is true, with individual experiences, and are by no means concerned either with the policies and intricacies of the many courts which their heroes visit or with the splendour of thought and art and discovery that is wakening at their sides. But the researches of these heroes are so various and so far-flung, their adventures so characteristic and so gay, that they cannot fail to give a vivid picture of their time and setting. For, with untiring industry and unquenchable hope, these Gentlemen Errant seek the ways and suffer the whims of a world of nations. Their Odysseys reach from Salisbury to Cracow and from Portugal to Denmark. They traverse the humming plains of Burgundy and Flanders, the leafy parks of England, the mellow gardens of France. They wander on the desolate Spanish uplands and in the fruit-filled Spanish valleys. They tread the lovely streets and lawless highways of Italy.
The lodge in the squalid sties of Poland and camp on the dreary battlefields of the Low Countries. In the great Germanic Empire, they are at home: they possess her stretching fores^g  xiii and her strong grey castles, and in her high-walled, rich-stored cities they hold their courts. Many, too, are the famous figures that appear in this pageant of years; for the period which the annals cover is one of the most important in European history. Within this century and a half happen the Renaissance, the Reformation and the Counter-Reformation; the distribution of the printing press, the revelations of Copernicus and the discovery of America; the growth, the triumph and the disintegration of the Holy Roman Empire; the evolution of England from the brilliant adolescence of the Planta- genets to the splendid maturity of the Tudors; the transformation of France from the formless impotence of half-dead feudalism to the ordered might of absolute sovereignty; the conversion of Spain from a land of chaos to land in bondage to the uttermost letter of law and orthodoxy; the abasement of Italy through the indignity of her politics and the exaltation of Italy through the supremacy of her art. And though these chronicles are scattered pebbles on a crowded shore, though their heroes pass strenuous lives in almost perfect ignorance of the vast movements that are surging around them, yet even the meanest has not remained untouched by the mighty tide.
The readers of history know more than the makers of history, and many a detail — insignificant to him who wrote it, though faithfully recorded— has for the student of today its appointed corner in that great temple of the past which each one must, in a sense, build for himself. Of my own part in this book, not much need be said. It has seemed to me that the early memorial literature of Middle Europe is not so familiar to ordinary English readers as it might be; since, if in this respect Germany and Austria cannot rival the wealth of France, or even of England and Italy, they yet possess many chronicles of life and of travel of far more than merely patriotic interest. T
he Gentlemen of Germany wrote the Gentleman of Provence 1— himself a diligent scrutiniser of men and marvels—' are voyaging folk, searching out strange things no less and perhaps more than any people upon earth.' And, although in the sixteenth century Sebastian Franck could still lament that there was scarce another nation so uninstructed as Germany in its own achievements,^ the records of these inquiring spirits are neither so few nor so faulty as he and even later writers supposed.

Who is  Nina Cust

Emmeline 'Nina' Cust was an English writer, editor, translator and sculptor. She was a member of The Souls, an upper class circle that challenged the conventions and attitudes of their class in the late nineteenth and early twentieth century
Download  13.4 MB PDF book