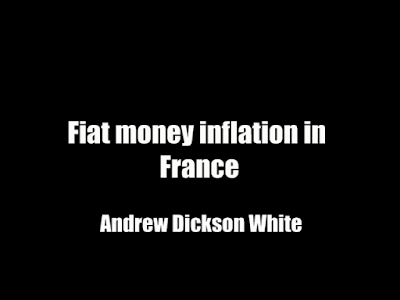 "Printed for private circulation only. Not to be reprinted or published."
I am greatly indebted to the generosity of Mr Andrew D. White, the distinguished American scholar, author and diplomatist, for permission to print and to circulate privately a small edition of his exceedingly valuable account of the great currency-making experiment of the French Revolutionary Government. The work has been revised and considerably enlarged by Mr White for the purpose of the present issue. The story of "Fiat Money Inflation in France" is one of great interest to legislators, to economic students, and to all business and thinking men.
It records the most gigantic attempt ever made in the history of the world by a government to create an inconvertible paper currency and to maintain its circulation at various levels of value. It also records what is perhaps the greatest of all governmental efforts — with the possible exception of Diocletian's — to enact and enforce a legal limit of commodity prices. Every fetter that could hinder the will or thwart the wisdom of democracy had been shattered, and in consequence, every device and expedient that untrammelled power and depressed optimism could conceive were brought to bear. But the attempts failed. They left behind them a legacy of moral and material desolation and woe, from which one of the most intellectual and spirited races of Europe has suffered for a century and a quarter, and will continue to suffer until the end of time. There are limitations to the powers of governments and of peoples that inhere in the constitution of things, and that neither despotisms nor democracies can overcome. Legislatures are as powerless to abrogate moral and economic laws as they are to abrogate physical laws.
They cannot convert wrong into right nor divorce effect from cause, either by parliamentary majorities or by unity of supporting public opinion. The penalties of such legislative folly will always be exacted by inexorable time. While these propositions may be regarded as mere commonplaces, and while they are acknowledged in a general way, they are in effect denied by many of the legislative experiments and the tendencies of public opinion of the present day. The story, therefore, of the colossal folly of France in the closing part of the eighteenth century and its terrible fruits, is full of instruction for all men who think upon the problems of our own time. From among an almost infinite variety, there are four great and fundamental facts that clearly emerge, namely,
(1) Notwithstanding the fact that the paper currency issued was the direct obligation of the State, that much of it was interest-bearing, and that all of it was secured upon the finest real estate in France, and that penalties in the way of fines, imprisonments and death were enacted from time to time to maintain its circulation at fixed values, there was a steady depreciation in value until it reached zero point and culminated in repudiation. The aggregate of the issues amounted to no less than the enormous and unthinkable sum of $9,500,000,000, and in the middle of 1797 when public repudiation took place, there was no less than $4,200,000,000 in face value of assignats and mandates outstanding; the loss, as always, falling mostly upon the poor and the ignorant.
(2) In the attempt to maintain fixed values for the paper currency the Government became involved in an equally futile attempt to maintain a tariff of legal prices for commodities. Here again, penalties of fines, imprisonments and death were powerless to accomplish the end in view.
(3) An wholesale demoralisation of society took place under which thrift, integrity, humanity, and every principle of morality were thrown into the welter of seething chaos and cruelty.
(4) The real estate upon which the paper currency was secured represented confiscations by the State of the lands of the Church and of the Emigrant Noblemen. These lands were appraised, according to Mr White's narrative and other authorities, at $1,000,000,000. Here was a straight addition to the State's resources of $1,000,000,000. It is ominously significant that within one hundred years under the "Peace of Frankfort" signed on the 10th May 1871, the French nation agreed to pay a war indemnity to victorious Germany of exactly the same sum, namely, $1,000,000,000 in addition to the surrender of the province of Alsace and a considerable part of Lorraine. The great addition to the national wealth, therefore, affected by the immoral confiscation of the lands in question disappeared with compound territorial interest added under the visitation of relentless retribution.
Download PDF book