Drawing for art students and illustrators 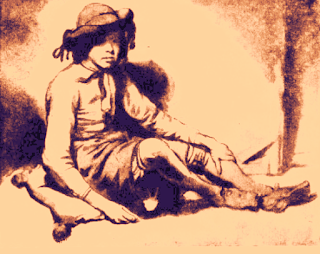 Lastly, in a book planned as this is, there must necessarily be a certain amount of repetition. Perhaps this is not altogether bad for the student; as all teachers know, important matters need more than one telling.- Allen W. Seaby

Excerpt from the author's introduction:
These days, when daily prophecies are made concerning the artwork required in the near future, in the shape of the pattern and costume designing, poster and advertisement work, illustration, etc. when one sees in the press a great campaign of correspondence teaching with the promise of remunerative employment to every student who "completes the course," with the implication that no long training in art study is necessary, and that there is a royal road to art, it becomes necessary to insist upon the importance of draughtsmanship in the classical sense, as understood by Holbein, Velasquez, Ingres, Menzel, and Degas.
This technical power or faculty, call it what we will, is not a conjuring trick, a mere sleight-of-hand to be learned as a series of "tips," but must be acquired, if at all, by severe training, and by intellectual visual effort. It must be searched for rather than picked up, and learned from one whom the student trusts, putting himself in his teacher's hands with confidence, not regarding him as one standing behind a counter ready for a fee to cut off a small snip of the fabric of art teaching, to show, say, how tricks with water. the colour brush is performed, or how to draw a pretty face.
When the student has arrived at some measure of the knowledge of art, he will press into his service all the refinements of technique which he can acquire from anyone who can teach him, but without that, he is the more a charlatan, the more dodges and manipulative processes he can command. The following chapters, therefore, are concerned withdrawing as a study, and an attempt is made in them to emphasize the importance of a student-like attitude of mind, and wise docility in carrying out tasks not perhaps in themselves very interesting, but necessary if the draughtsman is to be well equipped. Nor should readers cavil at such a term as "tasks," for though the emotional side of art is nowadays insisted upon, and rightly so, yet it is all the more necessary that the artist shall be absolutely the master of his instrument if he is to possess the souls of his listeners. And if this striving and study is necessary in music, still more is it in pictorial art. On the other hand, the study of drawing cannot proceed without the active interest of the pupil. 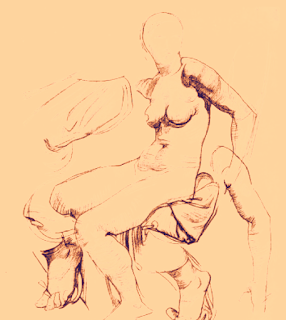 The notion still lingers that drawing is a discipline, that students should be made to 'do it because they do not like it. But when the eye loses its interest and pertinacity, a particular drawing is better laid aside, for further work will resolve itself into tinkering, embroider- ing or stippling, mere occupation without observation. If the study has been made on the right lines, if placing, proportion, movement and construction have been grappled with, the drawing has earned its place in the  Stairway of art study, for it has raised the student a step above his previous attempts.
A real responsibility rests on the student, who should ascertain for himself how far he can take a drawing, though the art teacher can do much to help him by exhortation and even example. Many students are slow to recognise the necessity of testing their powers of observation and expression in any one drawing; some artists have only forced themselves to this long after their school days were over, as witness Degas, who shut himself up for two years while he searched his powers of observation to the utmost in producing his exquisitely finished pictures of Paris street life. After some experience of teaching drawing, it seems to the writer that certain essentials of study, not only perhaps in drawing, but in all art are:
(1) the development of the sense of proportion, and by this is meant more than getting one's measurements right, but a feeling for good proportions, such as is generally admitted was innate in the Italians to a higher degree than in the northern peoples, and the reason lies at hand, for the former never lost touch with the classic canons of proportion, while the architecture and sculpture, which formed their environment, showed them proportion embodied.
(2) Hardly less important is the quality of sincerity, of being oneself, of not apeing another's style. Art Students, from their very temperament, are quickly impressed, not least by the work of the cleverer students.
Later on, they follow the manner of their master or of artists they admire. There is not much harm in this up to a certain point, and indeed art tradition has been built. up in some such way. On the other hand, the student with character and individuality, while showing in his work admiration for others, will feel within himself a wish to follow his bent, to do things his own way. From this comes character, a quality in artwork, which is spontaneous, and not to be striven for consciously. As for "style," that comes only to a few, and an art teacher has to leave it out of his calculations, happy if years after, the work of a former pupil is seen to possess that elusive and rare quality. But one can show one's students to some extent what style means in drawing; the rhythmical line of Botticelli, Ingres and the Oriental masters, the veracity and clarity of Holbein, the structural drawing of Durer, to name only a few masters. Certainly, every school should have reproductions of drawings by masters, early and modern, not in order to frighten students, or even that they should copy them, but to instil into their minds the qualities that the best drawings possess.
The student should study such reproductions, or better still, the actual drawings in the British Museum, at Oxford and elsewhere. He will see that each master has a rhythm peculiar to himself, not only a conscious rhythm, such as the marshalling of the masses as we see in Rembrandt's Hundred Guilder print, with their pyramidal or wave-like forms, all leading to the central group, or a similarly conscious effort to achieve a calligraphic flow of line as seen in the Chinese and Japanese masters; but a sub-conscious rhythmical stroke or accent, by which we know the artist as we might recognise him by his handwriting.

Who is Allen W. Seaby

Allen William Seaby Is best known as an ornithological painter and printmaker, and Professor of Fine Art at the University of Reading. He was the author of several art books for students, and also wrote and illustrated books for children.
Download Zip file contains PDF book 7 MB