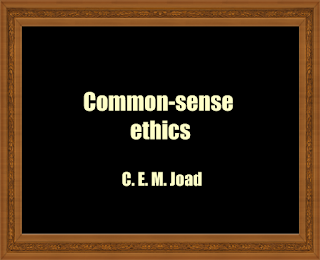 There is no class of judgments to which we appeal with more absolute confidence in the ultimate unanimity of different minds than moral judgments. If men have been found to defend the Holy Inquisition, the Roman gladiatorial shows, negro slavery, or frightfulness in war, it is not because they differ from their fellows in their judgments concerning what constitutes right and wrong, but because they can make an appeal to a sentiment in human nature which is not the subject of dispute but the arbiter.
When we try, however, to give definite form and substance to this sentiment itself, — and this is the aim of the philosophical science of Ethics, — we find serious difficulty. It was manifested in wide divergence in the ancient ethical theories, and it is a problem dividing different schools of thought in philosophy today.
Moreover, it is a problem to which no one is really indifferent, for it involves the problem of problems, — the nature and meaning of life.
This book is a study, an earnest, the fresh and living study of the ethical problem by a young philosopher who has reflected deeply on the metaphysical theories of the ancient and modem periods and has tried seriously to bring them into accord and to discover in them some guidance, particularly in regard to the political and social evolution which the present generation is witnessing. He describes his own view as that of common-sense Ethics. But by common sense, it is clear that he does not intend to class himself with unphilosophical opinion, either in reasoned or contemptuous opposition to philosophical theory.
A generation ago it was very widely held by writers on Ethics that the ethical problem, so far as the principle by which conduct should be ruled is concerned, depended on a previous question and was governed by the decision in answer to it: " Is life worth living? " It was taken for granted that if on inquiry this question has to be answered in the negative, then all conduct which makes effectually for the extinction of life is good to conduct, and all that makes effectually for the furtherance of life is bad. And this seemed in fact to distinguish not merely individual ethical systems, but to mark a fundamental divergence of orientation between different systems of philosophy and also between different religions. Broadly it marked the profound difference between East and West which Schopenhauer was the first to discover and make familiar to us.
We have now come to see that life is an activity, or force, or reality, which cannot in any way be affected by our individual opinion in regard to its desirability, measured by any possible or impossible hedonistic calculus. A consensus of modern research, scientific and philosophic, biological and psychological, has antiquated all the ethical and religious theories which made life subservient to a force and purpose superior to it and independent of it. The will to live is the nature of life, something in the very fact and expression of life, and not power, rational or irrational, which raises us above life and enables us to control it. To appreciate the significance of this in individual, social and political action seems to be the underlying motive of the author in this book.
Cyril Edwin Mitchinson Joad was an English philosopher and broadcasting personality. He appeared on The Brains Trust, a BBC Radio wartime discussion programme. He popularised philosophy and became a celebrity,
Download