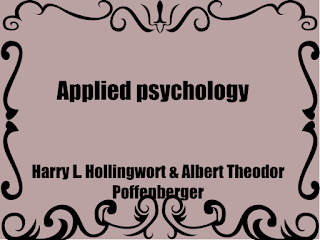 by Albert Theodor Poffenberger and Harry L. Hollingworth
Books in the field of applied psychology have tended in the past to belong in one or several of three categories, which may be described in some such way as the following:
(1) Technical monographs, such as are intelligible only to the advanced student or the professional psychologist;
(2)'"Volumes covering in an intensive way some particular and limited field of practice, such as education, advertising, mental examination;
(3) General and more or less prophetic popular essays, pointing out suggestive fields of interest. There exists no book which well serves as a general text of applied psychology, presenting its principal aims, types, methods, its various fields of endeavour, and its outstanding results and accomplishments. Students of applied psychology must at present be referred to a very scattered series of special articles, monographs or books, of varying value, and by no means generally, easily or equally accessible. The general reader, working without expert guidance, can hardly do more than a dip in a random way into magazine stories, subscription books, and an occasional serious exposition of the more restricted type.
The general textbooks of psychology do not have the practical point of view for which he is in search. Applied psychology is clearly on the way toward a dignified and prosperous existence. The present year has seen established the first professorship of applied psychology, the first American journal of applied psychology, and university courses and lectureships in applied psychology are rapidly multiplying. Psychology has been recognized as a vocation under the civil service regulations, and applied psychologists are finding themselves called to work in factories, schools, courts, hospitals, agencies, banks, employment departments, and various branches of municipal and civic enterprise. With this record of substantial achievement in applied psychology, it seems only appropriate that there should be also available a general textbook devoted to the subject.
The authors of the present book have both been engaged for several years in teaching, research and consultation in this field, and have long felt, in their own work, the need for an exposition of the subject, which should be comprehensive, suggestive and interesting without the sacrifice of definiteness, accuracy and balance. This need has prompted them to prepare the present book, which it is hoped may be useful at the same time to the student, the teacher and the general reader.
Download PDF book 7.4 MB