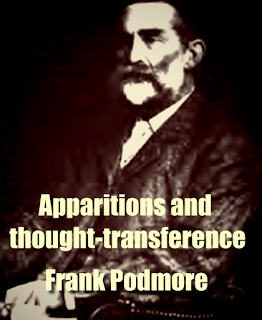 Frank Podmore was an English author and founding member of the Fabian Society. He is best known as an influential member of the Society for Psychical Research and for his sceptical writings on spiritualism,
Excerpt:
The following pages aim at presenting in brief compass a selection of the evidence upon which the hypothesis of thought-transference, or telepathy, is based. It is now more than twelve years since the Society for Psychical Research was founded, and nearly eight since the publication of Phantasms of the Living, Both in the periodical Proceedings of the Society and in the pages of Edmund Gurney's book,^ a large mass of evidence has been laid before the public. But the papers included in the Proceedings are inter- spersed with other matter, some of it too technical for the taste of the general reader; whilst the two volumes of Phantasms of the Livings which have for some time ^ The book actually bore on the title page the names of Edmund Gurney, F. W. H. Myers, and the present writer. But the division of authorship, as explained in the Preface, was as follows: — " As regards the writing and the views expressed, Mr Myers is solely responsible for the Introduction, and for the * Note on a Suggested Mode of Psychical Interaction; ' and Mr Gurney is solely responsible for the remainder of the book. , . , But the collection, examination, and appraisal of evidence have been joint labour."
Some contents of the book:
Chapter 1
Position of the subject — -Founding of the Society for Psychical Research — Definition of telepathy — General difficulties of the inquiry — Special sources of error — Fraud — Hyperassthesia — Muscle-reading — Thought-forms and number-habit.
Chapter 2
Experimental Transference of Simple Sensations  — Normal State Transference of Tastes — Of pain, by Mr M. Guthrie and others — Of sounds — Of ideas not definitely classed, by Professor Richet, the American Society for Psychical Research, Dr Ochorowicz — Transference of visual images, by Dr Blair Thaw, Mr Guthrie, Professor Oliver Lodge, Herr Max Dessoir, Herr SchmoU, Dr. von Schrenck- Notzing, and others.
Chapter 3
Experimental Transference of Simple Sensations wiring Hypnotised Percipiehstts Transference of tastes, by Dr Azam— Of pain, by Edmund Gurney — Of visual images, by Dr Liebeault, Professor and Mrs Henry Sidgwick, Dr Gibotteau, Dr Blair Thaw,
Download 9.5 MB PDF book