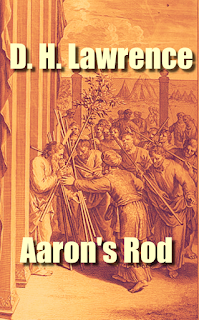 Written in the aftermath of the First World War, it illustrates the alienation and loss after the catastrophe on a personal level, symbolised in the rejection of pre-war lifestyle and values. The main character,
Aaron Sisson leaves his life in a Northern mining community behind to escape his unhappy marriage. He embarks on a journey to find a place for himself in a world that has broken down, lost all meaning, given up on the optimistic outlook of the 19th century.
Aaron Sisson, a union official in the coal mines of the English Midlands, is trapped in a stale marriage. He is also an amateur, but talented, flautist. At the start of the story, he walks out on his wife and two children and decides on impulse to visit Italy.
The biblical title refers to the rod of Aaron in the Old Testament, Moses' brother who built the Golden Calf in the desert for the worship of the Israelites
Download PDF book