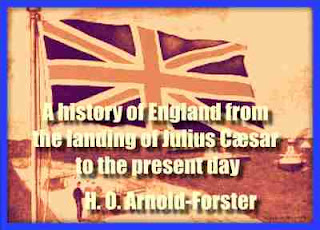 Excerpt from the introduction:
There is, and it may be hoped there will always be, a demand for a history of England. It would be idle to pretend that the supply is not large and in many respects adequate.
At the same time there are undoubtedly many thousands of persons who have neither the means to purchase, nor the leisure to peruse, the great standard works with which the genius and industry of modern historians have happily endowed us, and who yet wish to know something of their country's past and to understand how, from very small beginnings, our nation has achieved its present great position among the peoples of the earth. Those who are acquainted with the teaching of history in many of our public and private schools must be aware that the subject often fails to interest, and that some of the historical summaries now in use, though accurate and admirable in many respects, are read as a task and not as a pleasure.
In many homes, also, there is undoubtedly a demand for a History of England of manageable size at a reasonable cost and written in such a manner as to attract and pot to repel young readers. And while it is believed that the present History may to some extent meet the requirements of schools and of young readers at their homes, it is believed that it may also be found useful too. a still larger circle of readers. iv Preface A small work, written in simple language, sufficiently full to serve for reference, and at the same time sufficiently interesting to be read as well as to be consulted, work within the reach of all in a matter of price, and rendered attractive by good illustrations copied from first-rate originals, is what very many English men and women, both young and old, undoubtedly require. To supply such a need has been the sole aim of the author. A few words may be permitted with regard to the character of the work itself. In making yet another addition to the great library of English historical literature, some explanation, or perhaps indeed some apology, is due from the author. To apply the term "A History of England " to a contribution of this size may seem preposterous.
The record of our national life is so full, so long, so crowded with incident, so elaborate, that even great histories, written in many volumes by master hands, can only illustrate and cannot exhaust the theme to which they are devoted. The author of the present work is very conscious of the fact, and yet is reluctant to bring it forward with any such repellent title as "A Summary," or "An Outline of . English History."
Such titles seem on the face of them to imply that the element of interest and the romance inseparable from the life and doings of individuals are excluded and that an amplified chronological table has been made to do duty for a history. But to read English history and fail to realise that it is replete with interest, sparkling with the episode, and full of dramatic incident, is to miss all the pleasure and most of the instruction which its study if properly pursued can give. An attempt has therefore been made in the present History Preface v to clothe the skeleton of chronological fact with the flesh and blood which are essential parts of the animated and living figure.
In so small a work such an object can only be achieved by sacrificing very much that might well be included in a larger History. It has been necessary to select certain episodes and certain periods for detailed description, while other episodes and other periods receive but scant mention or are relegated to the " Summaries " which will be found at the heads of chapters. But throughout, a consistent endeavour has been made to maintain the thread of interest in the story, and the episodes selected for detailed description are, in the opinion of the author, those which most fittingly express the cardinal fact or the dominating idea of the time in which they occur. If an apparently undue number of pages be devoted to the story of Henry II. and Becket, it is because the story itself is an illustration of the great struggle between the royal and the ecclesiastical power which marked the time. The story of Magna Charta occupies more space than the record of other periods crowded with the incident; but the Charter, from the date of its being granted down to the present day, is a dominating fact in the whole history of England.
The Reformation and the great intellectual revival by which it was preceded and accompanied are treated at some length; and in this and in other instances pains have been taken to give life to the story and to make it interesting to the reader as well as serviceable to those whose studies are, unfortunately for himself, undertaken only with the view of qualifying for an examination.
Hugh Oakeley Arnold-Forster PC, known as H. O. Arnold-Forster, was a British politician and writer. He notably served as Secretary of State for War from 1903 in Balfour's Conservative government until December 1905
Author:  H. O. Arnold-Forster
Publication date: (1913)
Contains Illustrations
Download 30  MB PDF book Direct Download