A brief history of mathematics (1900)  by Karl Fink, Translated by Wooster Woodruff Beman. 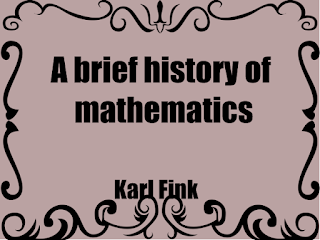 Excerpt from the translator's introduction
The translators feel that no apology is necessary for any reasonable effort to encourage the study of the history of mathematics. The clearer view of the science thus afforded the teacher, the inspiration to improve his methods of presenting it, the increased interest in the class-work, the tendency of the subject to combat stagnation of curricula, — these are a few of the reasons for approving the present renaissance of the study.
This phase of scientific history which Montucla brought into such repute — it must be confessed rather by his literary style than by his exactness — and which writers like De Morgan in England, Chasles in France, Quetelet in Belgium, Hankel and Baltzer in Germany, and Boncompagni in Italy encouraged as the century wore on, is seeing a great revival in our day. This new movement is headed by such scholars as Giinther, Enestrom, Loria, Paul Tannery, and Zeuthen, but especially by Moritz Cantor, whose Vorlesungen ilber Geschichte der Mathematik must long remain the world's standard. In any movement of this kind, compendia are always necessary for those who lack either the time or the linguistic power to read the leading treatises.
Several such works have recently appeared in various languages. But the most systematic attempt in this direction is the work here translated. The writers of most handbooks of this kind feel called upon to collect a store of anecdotes, to incorporate tales of no historic value, and to minimize the real history of the science. Fink, on the other hand, omits biography entirely, referring the reader to a brief table in the appendix or to the encyclopedias. He systematically considers the growth of arithmetic, algebra, geometry, and trigonometry, carrying the historic development, as should be done, somewhat beyond the limits of the ordinary course.
At the best, the work of the translator is a rather thankless task. It is a target for critics of style and for critics of matter. For the style of the German work, the translators will hardly be held responsible. It is not a fluent one, leaning too much to the scientific side to make it always easy to read.
Were the work less scientific, it would lend itself more readily to a better English form, but the translators have preferred to err on the side of rather strict adherence to the original. As to the matter, it has seemed unwise to make any considerable changes. The attempt has been made to correct a number of unquestionable errors, occasional references have been added, and the biographical notes have been rewritten. It has not seemed advisable, however, to insert a large number of bibliographical notes. Readers who are interested in the subject will naturally place upon their shelves the works of De Morgan, Allman, Gow, Ball, Heath, and other English writers, and, as far as may be, works in other languages.
The leading German authorities are mentioned in the footnotes, and the French language offers little at present beyond the works of Charles and Paul Tannery. The translators desire to express their obligations to Professor Markley for valuable assistance in the translation. Inasmuch as the original title of the work, Geschichte der Elementar-Mathetnatik, is misleading, at least to English readers, the work going considerably beyond the limits of the elements, it has been thought best to use as the English title, A Brief His tory of Mathematics.
Download 7.3 MB PDF book