Sermons by the devil 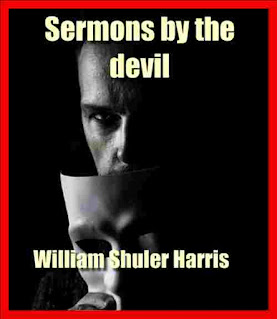 Preface by the Author

The part that Satan plays in the drama of human life is often larger than a person will admit. Each one of us is not only acting but we are constantly acted upon by one or the other of two great influences. The Good Spirit endeavours to lead us to the skies, and its angels are ever willing to minister to our real needs.
The Evil Spirit, either openly or undercover, seeks to destroy our mind with untruth by preaching to us his black sermons of death. Some of these sermons are short, others are longer, and at times they are delivered to us in the language of an angel with all the dignity that good scholarship might command. This volume was commenced with the purpose of tearing off his Satanic mask so that people might see more clearly the real source of these dark sermons. There are many people who, after yielding to temptation, will declare that they have acted independent of any evil influence. Satan is pleased to see a person rest in the shadow of such a delusion, but it is better for each one of us to know that either the good or evil spirit is seeking to be the guest of our thoughts, and it depends upon our attitude who will be entertained.
The most deceived man of all is he whose mind is influenced by the Evil Spirit and yet he believes that he is besought by the Good Spirit. We hope to reach some of such persons whose eyes are colour blind and whose ears are so impaired that they alone cannot distinguish between the voices that are calling them downward and those that are calling them upward.
We aimed to keep the book clean throughout, even though we tried to bring out the real character of the unclean Spirit. We have advanced only such arguments of Satan as he uses continually in his practical dealings with people. We were particular that none of the chapters should be a source of temptation, but that they might give Satan his proper setting more clearly in the minds of the reader, and thereby destroy the edge of his sword as much as possible. To the artwork of this book, the most careful attention has been given, both by the author and the famous artist, Paul Krafft, of New York.
Neither work nor money was spared to produce the most accurate drawings so as to assist the mind in grasping the truths of the book. And now, that the volume is completed, it is the fond hope of the writer that it may not fall short of its purpose.
The author sought the aid of Divine wisdom in producing this book, and he now depends upon the same power to carry it into the channels of His own choosing.
The Author. May 12, 1904.

Preface by the publisher :

In some instances when the author of a book is unknown it is customary to secure some noted per-son to write the Introduction. It is unnecessary, however, in the presentation of this book to the public, inasmuch as its able author is so well known. Those who have read his former works are numbered by the hundreds of thousands. When 'an author's writings have been received with such a welcome and endorsed with such a phenomenal sale, not only in his own country but also in other lands, it is unnecessary to introduce him and his works, as his name is already in the hearts of the people.
We want to say that this book, entitled "Sermons by the Devil," is original and unique from cover to cover and that the author spent much time and thought in its preparation. We believe that it is the crowning work of his life. The illustrations have been drawn by the genius, Paul Krafft, and they are the best of his efforts.
Each picture is a careful study and is perfected with much painstaking work. We have saved neither time nor expense to make this one of the best books ever put before the people for the low price we are asking for it. We hope that this work will be received with welcome in millions of homes and that its good mission will not be misunderstood.
The book will surely do much good, and anyone helping to dis- tribute it will be sowing seed that will bear a rich harvest long after his earthly life is ended. In these times of wickedness and greed, there is a great need for a spiritual awakening, and a book of this character is well calculated to reach the desired object. It is our hope that all this and even more will be accomplished through the influence of this book.

Satan's Sermon on Suicide, 17
Sermons on the River of Life, 25
A Serpent Sermon by Satan, 35
Satan's Business Advice, 40
The Death of a Saloon-Keeper, 45
A Sermon by Satan to a Dying Christian, ... 53
Satan Preaches to a Society Woman, 57
Preaching Behind Curtains, 60
Views of Satan on Lying, 65
Little Sermons by Satan to Persuade People
to Reject the Great Invitation, 73
Satan's Musical Sermon, 87
Satan on Child Training, 91
Satan on Christian Zeal, 96
The harmlessness of Sin, 100
The Lord's Supper, 104
Family Worship, 110
Satan and Purity, 118
The Journey of Miss Pilgrim, 123
A Time When Satan Failed,, 143
How To Conduct Revival Meetings, 148
A Tobacco Sermon by Satan, 157
The Devil's Free Lunch Counter, 165
Download PDF ebook