A handbook of public speaking 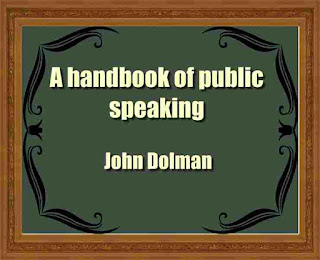 The purpose of this book is to furnish the student of public speaking with a concise statement of the principles he ought to know, together with a few hints as to the method. It is in- tended to be used in conjunction with platform practice, preferably under the critical guidance of a teacher; for that reason, it is not in the form of graded exercises and assignments, but in the form of a series of collateral lectures, each covering some fundamental lesson which the student can well afford to learn from the wisdom and experience of others.
No subject has been covered exhaustively, as the size of the book will show; and in most cases I have purposely tried to stop at the point of greatest interest, leaving plenty of room for further inquiry on the part of the student, and for supplementary comment by the teacher. The book is confined to public speaking, which to me means the communication of one's own thoughts to an audience, in one's own words and personality. It is not concerned with declamation, the oral interpretation of literature, or dramatics.
I lay no claim whatever to originality. I have merely restated in a convenient form — sometimes using' the teacher's privilege of over-statement — a few fundamental truths most of which were old when Aristotle and his contemporaries stated them, and most of which has been restated many times. My only excuse is that no available book with which I am familiar presents these truths briefly enough and simple enough for the needs of the masses of college students who have time for only one general course in public speaking; the available books seem too large, or too technical, or too expensive, or too far above the earth.
Whatever may be the faults of this one, I can positively guarantee that every problem discussed is real, every principle of daily application, every suggestion one that has been found to work in practice. I gratefully acknowledge much indebtedness to current books on various phases of public speaking work, particularly to those of A. E. Phillips on " Effective Speaking " and J. A. Winans on " Public Speaking "; also to the personal influence of Professor Winans and many other congenial friends in the Eastern Public Speaking Conference and the National Association of Teachers of Speech. To my colleague, Mr Reese James, I am especially indebted for a careful reading of the manuscript and many helpful suggestions.
The student will bear with me, I hope, for talking to him like a Dutch uncle in certain chapters, and for resorting in others to the practice of talking about him, behind his back, in a loud voice, for the purpose of being overheard. A more impersonal tone might have been less disturbing, but most students of public speaking need to be disturbed. And after all, public speaking is personal.