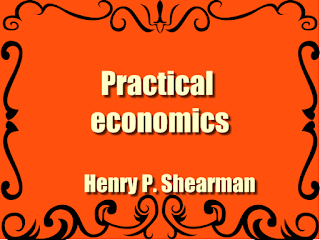 The rise and rapid spread of business education which has been such a prominent feature of our modern educational system has not only resulted in a call for courses dealing with particular fields of business activity, ks accounting, banking and selling but has considerably augmented the demand for a knowledge of the general theory of business as treated in the science of economics.
From long association with businessmen as well as from the teaching and discussion of economics with students drawn largely from the ranks of practical men of affairs, I have been impressed with the insistent demand for a simpler and more concrete statement of economic theory than is usually found in the standard works. To satisfy this demand the present book has been prepared. No attempt has been made to depart radically from standard economic theory.
The aim has rather been to state in simple language and to explain as concisely as possible, the general laws and principles underlying and governing the production and distribution of wealth in the United States today, for the benefit of all who desire to gain a clearer understanding of the structure of our economic system and of the forces operating within it. In consideration of the increasingly important part played in mod- ern affairs by a business organization, more attention has been devoted to it than has been customary; and it is treated as a sep- arate factor in production along with land, labour and capital.
While economics is concerned with the theory of busi- ness and its peculiar function are to set forth the operation of those broad and fundamental laws governing business as a whole, special pains have been taken to point out their practical consequences in everyday business life. In other words, the. the connection between theory and practice has been kept constantly in view and wherever possible the practical application of laws has been pointed out by illustrations drawn from modern business practice. Furthermore, the human side of the subject has been emphasized and frequent reference has been made to the bearing of economic laws on the personal interests of individuals whose welfare in the aggregate constitutes the national well-being.
The economic problems of today have assumed such proportions as to have completely outgrown adequate treatment in an elementary text and are now rightly and better dealt with in separate treatises. No attempt has been made, therefore, to crowd these in, but rather to state clearly the laws and principles on which they rest.
Here again, every opportunity has been taken to point out the relationship between the laws discussed and the questions of the day upon which they bear. In writing on a subject which has so challenged the attention of thoughtful men for centuries and which already has such rich literature one must naturally owe much to previous writers. On account of their number, I regret that I must limit myself to a general acknowledgement of my indebtedness. To my old colleague Dr Wm. M. Devany and to Dr Wm. H. Walker, both of whom read a large part of the manuscript, I tender my thanks. During the five years, the book was in progress, very able and courteous service was afforded me in research and statistical work by the staff of the reference department of the Carnegie Library of Pittsburgh.
Download PDF book 9.4 MB