A one-sided autobiography, containing the story of my intellectual life. 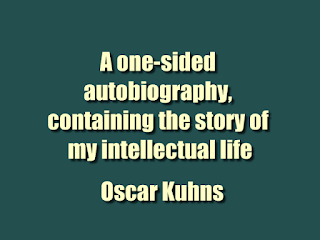 Oscar Kuhns was an author and translator.
The object of the author in writing this book has not been to produce a series of critical essays, nor to record the result of special studies pursued with the direct purpose of publication.
Eather have the thoughts, reflections, facts, and fancies contained herein, been the slow accumulation of years, and the book itself aims merely to sum up the experiences of a lifetime, mostly spent in the field of study and teaching. In discussing the books I have read, it is my purpose to speak only of those which have had a deep effect and abiding influence upon my own life, which have sunk into my mind and heart, and which have aroused in me a feeling of gratitude for information received, for a pleasant hour's amusement, and, above all, for the uplift of mind and soul. I have not said much of books that have not touched me in some way or other.
There are many such that I have read, which have either left me utterly indifferent or have impressed upon me feelings bordering upon positive dislike For books are like men: they may be shallow or deep, good or bad, degrading or uplifting; and it is of as supreme importance for us to choose our books as it is to choose our friends.
For, after all, the real essence of literature is not the outer form, nor the subject matter pure and simple; it is, rather, the personality of the writer, his way of looking at the great world-spectacle about him. It is this which distinguishes him from the mere virtuoso of words, on the one hand, and from the technical chronicler of the facts of science or history on the other hand. By the accumulation of facts and the laws deduced therefrom, we build up the vast superstructure of human science; we have the record of events and movements in the past annals of mankind — and that is history; we have the record of the theories of our predecessors as to the interpretation of the universe in which we live, its origin, its meaning, and its final fate — and that is philosophy and theology. But, besides all this, we have another record, not of facts or laws or events, but of the thoughts and feelings, the aspirations and imaginations of mankind, revealed in the personal experience of certain individuals, who by means of the written word have opened to the world at large the windows of their soul.
From the dawn of civilization to the present time men have looked out upon this world of ours, have seen its sadness and its glory, have brooded over its mysteries, have been gay, serious, melancholy, have lived and loved and been gathered to their fathers, leaving no more trace behind them than the foam upon the crest of the ocean wave, or the snows of yesteryear. From time to time, however, arise certain men, who see the same spectacles, feel the same passions, brood over the same problems, yet, who, having the gift of expressing their thoughts in words, bequeath their inner life to posterity in epic, dramatic, or lyrical poetry, or in the various forms of prose.
This, in the larger sense, is literature — not the record of fact or information, but the personality of certain representative minds of all times and lands, through whom nature and life are reflected. Literature, then, representing the thoughts and feelings of all kinds of men, of all degrees of goodness and badness — the cool and sensible, the sentimental and mystical, the kind and tender, the harsh and unfeeling — must be as varied as men themselves; and so we have good books and bad books, books overflowing with love and tenderness, and books in which "the heart seems all squeezed out by the head." For myself, this personality of the writer is as important as the book itself. And when T find a man uttering noble thoughts and sentiments, and his character harmonizes therewith, I feel a double pleasure; but when, as may happen, I see a man uttering the same thoughts whose character is small and mean, and not in harmony with what he says, I feel a sense of irritation, and, as Socrates says, in a similar case, the better he speaks the greater my irritation.
There is always a great temptation in dis- cussing such a theme as one's reading, especially in the case of the great writers, to fall into a certain lack of sincerity, warming up oneself to enthusiasm for the thing discussed, like those teachers spoken of by a French critic, who are paid to become enthusiastic over the classics aux heures de legons. And so we often see. men discussed as if they were utter without fault, beautiful passages selected and given as typical of the whole, in such a way that a false impression is often given, and the young student finds himself at a loss how to admire many things in a writer his teacher has taught him to look on as impeccable.
Download