Money-hunger; a brief study of commercial immorality in the United States 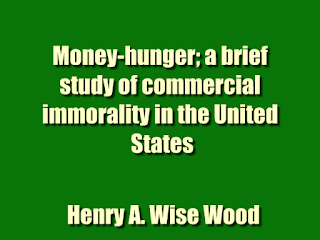 The recent exposures of commercial immorality existing in high places, and the wide difference of opinion which exists concerning the degree in blameworthiness of the acts revealed, point to the conclusion that a rigidly correct attitude in business, and a clear understanding of what constitutes it, are far less prevalent in the community than is generally supposed.
Large numbers of people are presumably honest in thought and in Hunger conduct, but there is no established and universally accepted code of correct business behaviour — more particularly with respect to the finer shades of commercial integrity; Instead, there prevail only vague notions concerning the correctness of many acts which lie between the extremes of acknowledged theft and indubitable honesty. Recent revelations have disclosed crimes new neither in kind nor, altogether, in degree — for the same practices, although often exposed, have existed for many years in all their variety.
But the general spread of commercial immorality among all classes of our people is of such comparatively recent occurrence that the writer has felt constrained to isolate and examine the causes. Hunger may be referred, and, if possible, to discover and point out the correctives which in time may be expected naturally to assert themselves, as well as those which society itself obviously should provide and apply. Towards loose commercial morals, there has grown up a tolerance on the part of a cynically lenient public which has steadily sapped the characters of men in positions of trust.
While most of them escape the statutes' definition of inability, nevertheless, in greater or less degree, all are native to that shady hinterland of crime into which the hand of the law scarcely as yet has shown sufficient cunning to reach. The fact that the community at large is wanting in agreement as to what constitutes dishonourable conduct in business relations, is evidenced by the various ways in which questionable commercial transactions are generally regarded. These differ- ing points of view range from the frank defence of their " practical " correctness, through toleration, cynical indifference, denunciation born of the propensity to decry "success" because of envy or malice, to condemnation based upon a clear under-standing of right and a firmly held attitude of rigid personal honesty.
Henry Alexander Wise Wood was an American inventor, of a high-speed newspaper press and member of the Naval Consulting Board. His father Fernando Wood was mayor of New York City and a Democratic Party member of Congress, and his uncle Benjamin Wood was also a Democratic member of Congress. He married Elizabeth Ogden
Download PDF book 1.6 MB