From Comte to Benjamin Kidd; 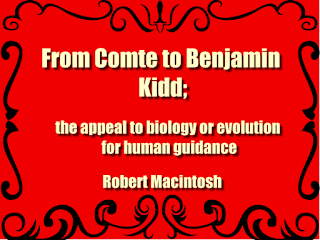 the appeal to biology or evolution for human guidance

The historical sketch and criticism here attempted had its proximate origin in two consecutive years' work with a senior class of sociology at Lancashire College. In 1896-97 essays were prescribed on topics suggested by Mr Benjamin Kidd's Social Evolution; while the seniors of 1897-98 attended lectures covering rather more ground. The material thus collected has been again revised and again considerably added to.
The literature on the subject is always growing. Some books of consequence, old or new, must have been overlooked. Still, it is hoped that the subject itself has well-defined limits. The appeal to biology, outlined by Comte, newly defined and emphasised by Darwinism, has now been stated in the most extreme form logically possible. Mr Kidd's book holds that significant position. In studying the questions raised, the author has found himself, though with certain grave reserves, more and more thrown back upon philosophical principles learned at Glasgow, above twenty years ago, from the present Master of. Balliol College.
I wish to express thanks for kind help on different points: to Professor Henry Jones of Glasgow University; to the Rev. A. Halliday Douglas, Cam- bridge; and, among others, very special thanks to Professor J. Arthur Thomson and Mr Norman Wyld. Both Mr Thomson and Mr Wyld, while busy with important work on the theory of natural selection, found time to give an amateur valuable information bearing on the meaning and merits of Weismann's doctrine of Panmixia.
Contents:
Comtism, with some scattered parallels.--Simple evolutionism.--Spencer, Stephen.--Darwinism, or struggle for existence.--Hyper-Darwinism.--Weismann, Kidd
Mackintosh, Robert, 1858-1933
Download PDF book