On the great highway; the wanderings and adventures of a special correspondent. 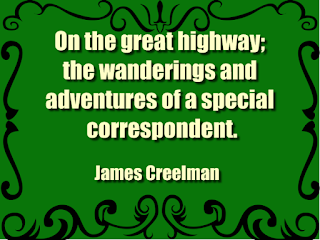 These pages from the experiences of a busy man are intended to give the public some idea of the processes of modern journalism which are gradually assimilating the human race.
The newspaper reader, who sits comfortably at home and surveys the events of the whole world day by day, seldom realizes the costly enterprise and fierce effort employed in the work of bringing the news of all countries to his fireside; nor does he fully appreciate the part which the press is rapidly assuming in human affairs, not only as historian and commentator but as a direct and active agent.
The author has attempted to give the original colour and atmosphere of some of the great events of his own time and leaves the duty of moralizing to his indulgent patrons. The human nature of men and women everywhere
James Creelman was a Canadian-American writer famous for securing a 1908 interview for Pearson's Magazine with Mexican president Porfirio Díaz, in which the strongman said that he would not run for the presidency in the 1910 elections.
Contents:
The white shepherd of Rome.--The storming of Ping Yang.--Interview with the king of Corea.--A ride with the Japanese invaders in Manchuria.--Battle and massacre of Port Arthur.--The avatar of Count Tolstoy.--Tolstoy and his people.--"The butcher."--Familiar glimpses of yellow journalism.--Battle of El Caney.--Heroes of peace and war.--A talk with Kossuth.--The Czar on his knees.--Greeks on the verge of war.--Sitting Bull.--On the firing line in the Philippines.--A race with a woman for the cable.--In the black republic.--Newsgathering in the clouds.--McKinley, the forgiving
Download PDF book 6.4 MB