Voltaire in his letters - selection from his correspondence 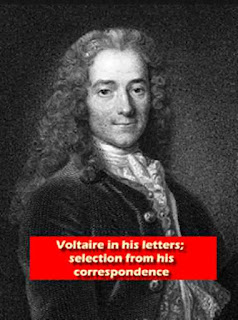 From Introduction:
Voltaire had a fecundity of inspiration — good measure, pressed down and running over — which allowed him to be at all times perfectly spontaneous: and one of the most cunning minds in the most artificial age in the history of the world is not the less one of the easiest and natural of its letter-writers.
Good letters, in any language, will be most often found to be written by persons living quiet and uneventful lives, whose range was narrow, and who lived rather in books and dreams than in the world. Witness Cowper's "divine chit-chat" to the accompaniment of the bubble of Mrs Unwin's teaurn and the click of her knitting needles, or to the hum of bees over his mignonette and the song of his linnets. Witness too Mme. de Sevigne's exquisite babble of affection for her daughter; Edward Fitzgerald's delightful cultivated gossip from his country town;
Mrs Carlyle's trenchant wit on her maidservants and whitewashers; and the delicate thoughtfulness of the brief correspondence of the poet Gray.
Gray's friend, Horace Walpole, was indeed himself a part of history and his famous Letters are no small contribution to it, yet it is chiefly the petty spites of political cliques and the scandals of the high life of his day on which he enlightens us. Byron — one of the best, because one of the most natural, of correspondents — managed to write reams of letters through some of the most thrilling events in the history of our race without making half a dozen allusions to them.   But Voltaire was not only contemporaneous with almost the whole of one of the most remarkable centuries of history — born in 1694 he did not die until 1778 — but himself from first to last played a great role in this century, and was palpitatingly alive to the very finger-tips to its importance and its possibilities — to everything that made it shameful and to everything that made it glorious.
This contains selections of Voltaire's letters.
Publication date:1919
Translated by  Evelyn Beatrice Hall
Download Voltaire in his letters; being a selection from his correspondence 6.5 MB