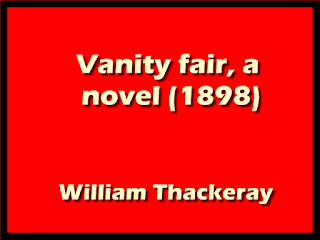 Vanity Fair is an English novel by William Makepeace Thackeray, which follows the lives of Becky Sharp and Amelia Sedley amid their friends and families during and after the Napoleonic Wars.
It was first published as a 19-volume monthly serial from 1847 to 1848, carrying the subtitle Pen and Pencil Sketches of English Society, reflecting both its satirisation of early 19th-century British society and the many illustrations drawn by Thackeray to accompany the text.
Critics hailed the work as a literary treasure before the last part of the serial was published. In her correspondence, Charlotte Brontë was effusive regarding his illustrations as well: "You will not easily find a second Thackeray. How he can render, with a few black lines and dots, shades of expression, so fine, so real; traits of character so minute, so subtle, so difficult to seize and fix, I cannot tell—I can only wonder and admire... If Truth were again a goddess, Thackeray should be her high priest.
Download 27 MB PDF book