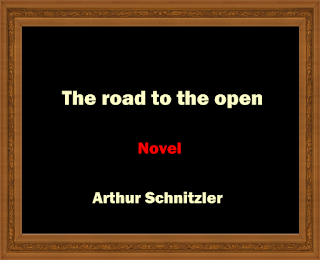 A novel by  Arthur Schnitzler translated by Horace Barnett  Samuel
Der Weg ins Freie (translated as "The Way into the Open" and most often "The Road into the Open") was published by Arthur Schnitzler in 1908.
The principal character of Der Weg ins Freie is the aristocratic young composer Georg von Wergenthin-Recco who has talent but lacks the drive to get down to work and spends most of his time socializing with members of the assimilationist, artistically sensitive Jewish bourgeoisie of Vienna and other non-Jews like himself who enjoy their company.
The plot centres on his ultimately unhappy affair with a Catholic lower-middle-class girl named Anna Rosner. The novel's reputation rests not on the story of this affair, however, but Schnitzler's brilliant description – based on first-hand acquaintance – of the milieu he describes and the topics that interest it, including the arts, the psychology of love, and the anti-semitism that was coming to dominate so much of life and politics in Austria-Hungary of the time.
Excerpt:

No, it rippled to me out of the waves of the sea when I went for a walk one morning along the shore. Being alone is particularly good for my work, so is a change of scene. That's why I promise myself all kinds of things from my trip." He told him about Heinrich Bermann's opera plot, which he found very stimulating. When Heinrich came back again, Leo was to make him seriously start on the libretto

One evening he had wandered about amid the ruins of the Imperial Palace until the approach of dusk and from the height of the Palatine Hill he had seen the sun set in the Campagna with all the proud delight of the man who is alone. He had then gone driving for a while along the ancient wall of the city to Monte Pincio,

Frau Rosner's letter contained the news that all was well at home, that they would all be very glad to see Anna again, and that Josef had got a post on the staff of the Volksbote with a salary of fifty guldens a month. Further, an inquiry had come from Frau Bittner as to when Anna was coming back from Dresden, and if it was really certain that she would be back again next autumn because otherwise they would, of course, have to look about for a new teacher. . . . Anna stood motionless and expressed no opinion.