Encyclopedia of prose and poetical quotations. 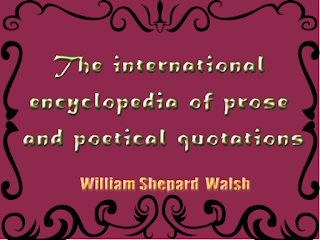 The international encyclopedia of prose and poetical quotations from the literature of the world, including the following languages: English, Latin, Greek, French, Spanish, Persian, Italian, German, Chinese, Hebrew, and others, under one alphabetical arrangement; with a complete concordance to the quotations, indexes of the authors quoted and topical indexes to subjects, with cross-references
Eccerpt:
The "Encyclopedia of prose and poetical quotations" is divided into four parts :
1. A Topical Index of the Subjects of the quotations with cross ref- erences to other subjects which are of allied interest.
2. A List of the Authors Quoted, with dates of their birth and death, and the pages on which the quotations from them are to he found.
3. Dictionary of Quotations in the English and Foreign Languages, arranged alphabetically under words which denote the subject or prin- cipal sentiment of the quotation, each quotation being identified by the name of the author, the work from which It is taken and the location as closely as practicable. A valuable feature of the arrangement used in this work is the fact that Latin and all quotations from other foreign languages are classified under the same alphabetical arrangement with the English quotations, an arrangement which makes it unnecessary for the user to refer to more than one list to find either the original quota- tion in a foreign language or its translation in English.
4. A Complete Concordance to the Dictionary of Quotations. Every prominent word in every quotation is indexed with sufficient context to locate every passage in which the word occurs. In this concordance it is noteworthy that the index words, for instantaneous distinction, are printed in bold-face type, the quotation or portion of quotation which they index being printed, when derived from English literature, in the ordinary Roman letter.
Quotations from foreign languages are printed in italic letters. To preserve the desirable conciseness the index word in each quotation of the concordance is represented only by its initial, as the reader will perceive that it is unnecessary to print the word in full. Furthermore, quotations from the eight authors most frequently quoted are followed by a classifying mark which instantly accredits them to their author. Thus the quotations from the following authors, as being those most frequently quoted, are distinguished by the signs which follow their names
Download  37 MB PDF book