The insulted and injured by  Fyodor Dostoyevsky, 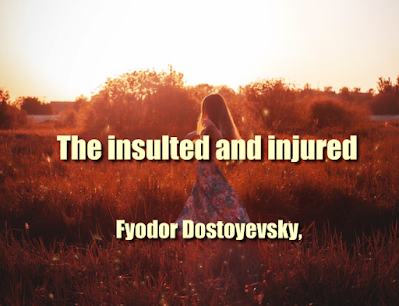 A novel in four parts and an epilogue translated by Constance Black Garnett,
Plot :
Natasha leaves her parents' home and runs away with Alyosha (prince Alexey) – the son of Prince Velikovsky. As a result of his pain, her father, Nikolai, curses her. The only friend that remains by Natasha's side is Ivan – her childhood friend who is deeply in love with her, and whom Natasha has rejected despite their being engaged. Prince Valkovsky tries to destroy Alyosha's plans to marry Natasha, (I will stop here)
This story is one of the best classics.
Some excerpts from the novel

“If you want to be respected by others, the great thing is to respect yourself. Only by that, only by self-respect will you compel others to respect you.”

“She enjoyed her own pain by this egoism of suffering, if I may so express it. This aggravation of suffering and this rebelling in it I could understand; it is the enjoyment of man, of the insulted and injured, oppressed by destiny, and smarting under the sense of its injustice.”