The great secret: a tale of tomorrow 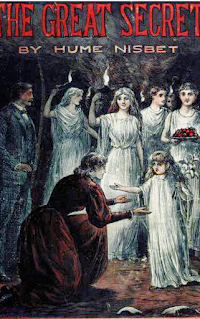 Interesting apocalyptic story
A Preface is an explanation or an apology from the Author to the Reader. In the present work, the author finds it difficult to write this Preface, for he cannot explain, and he does not care to apologise, honestly and sincerely as he desires to give no offence. If he might make use of a somewhat hackneyed phrase, he would like to say that he was impressed to write what is here printed; in fact, that he had no rest, night nor day, until he accomplished his task.
Yet it was a workover which he hesitated long and doubtfully before beginning, for, although intensely interested in the subject, he would have liked if he could have deferred it until a more convenient season. But with that inward or outward urging, he was forced to give way at last and lend his pen, in spite of his early training, prejudices, and later- gained practical materialism, with the dread of incurring ridicule or giving offence, protesting all the while at this strange amble of his Pegasus. Now, however, that the labour is over, he trusts that the result may interest some who may be curious about such occult matters, comfort others who may not be quite satisfied with what they do know at present and exonerate the Author from all blame. He has done what he could to lift a small corner of the heavy veil which hangs between today and tomorrow and now begs to leave this Great Secret to the thinking minds of the reader.
Download PDF book 5.3 MB