The four books: The great learning, The doctrine of the mear: Confucian Analects and The Works of Mencius 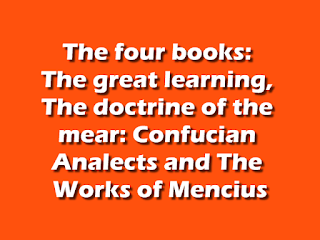 Excerpt
The origin of the Chinese, like that of the other nations of the Earth, is veiled in the mystery of unrecorded aeons. Whence they came and how, who with certitude shall tell? Surmise, we may, but who shall confirm? Infer we may, from footprints dim and o trodden, and who shall deny?
That this vast multitude had a beginning is certain, but where and when did it take its rise? Were they one of the many Mongolian tribes which occupied the Far East when Asia was still joined to the continent of America? Did they, through the discovery of writing and its concomitant advantages, raise themselves above their fellows, the Tartars, the Ainos, the Japanese, perhaps the Red Indians? Or did they, as is generally advocated, some three thousand years before Christ, leave the original habitat of civilised humanity in Western Asia, in obedience to some great centrifugal movement which drove the tribes of mankind forth from their common centre to replenish the Earth and subdue it? Such may have been the case: who shall tell?
Let us, at any rate, accept this as the most reasonable theory, and think of the fathers of the Chinese race wandering, perhaps for generations, over the boundless prairies of the North West, maintaining their families by pastoral occupations as they slowly forged their eastward way, a gradually increasing host, bringing with them, along with other arts of civilisation, knowledge of and preference for husbandry, which led them to settle down upon the fertile lowlands of Shansi, and there to abandon a nomad life for pursuit more in keeping with their inclinations.
At least we may with reasonable assurance maintain that they were a pastoral before an agricultural people, for apart from the testimony of their architecture in the tent-like shape of the national roof, there is even less disputable evidence in the etymology of their language, sheep and cattle figuring as root-words in early and important characters. Such evidence we have in words like |J good, H excellent, J| justice, $ pastor, shepherd; and numerous others. Granted then that the race set out from some common cradle of humanity, what did they find on reaching their Canaan, the country of their adoption? The waste howling wilderness, through which they had wearily plodded their homeless way, no longer stretched forbidding hands against them, but even as the Israelite found land which to him, after his forty years of aimless wandering, seemed to be flowing with milk and honey, so the pioneers of this vast race found land of beauty, a " Land of Flowers," the name with which they early designated their heritage.
Download 37 MB PDF book