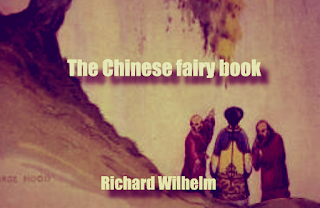 By Richard Wilhelm  and illustrated by Frederick Herman Martens
Excerpt:
The fairy tales and legends of olden China have in common with the "Thousand and One Nights" an oriental glow and glitter of precious stones and gold and multicolored silks, an oriental wealth of fantastic and supernatural action. And yet they strike an ex- otic note distinct in itself. The seventy-three stories here presented after original sources, embracing "Nursery Fairy Tales," "Legends of the Gods,"
"Tales of Saints and Magicians," "Nature and Animal Tales," "Ghost Stories," "Historic Fairy Tales," and "Literary Fairy Tales," probably represent the most comprehensive and varied collection of oriental fairy tales ever made available for American readers. y, their infinite variety of subject.
Yet, like the "Arabian Nights," they will amply repay the attention of the older reader as well. Some are exquisitely poetic, such as "The Mower-Elves," "The Lady of the Moon" or "The Herd Boy and the Weaving Maiden"; others like "How Three Heroes Came By Their Deaths Because Of Two Peaches", carry us back dramatically and powerfully to the Chinese age of Chivalry. The summits of fantasy are scaled in the quasi-religious dramas of "The Ape Sun Wu Kung" and "Notcha," or the weird sorceries unfolded in "The Kindly Ma^cian". Delightful ghost stories, with happy endings, such as "A Night on the Battlefield" and "The Ghost Who Was Foiled," are paralleled with such idyllic love-tales as that of "Rose of Evening, or such Lilleputian fancies as "The King of the Ants" and "The Little Hunting Dog". It is quite safe to say that these Chinese fairy tales will give equal pleasure to the old as well as the young.
They have been retold simply, with no changes in style or expression beyond such details of presentation which differences between oriental and occidental viewpoints at times compel. It is the 'writer's hope that others may take as much pleasure in reading them as he did in their translation.
Some contents :
I "Women's "Words Part Flesh and Blood. 1
II The Three Rhymsters i.. 4
III How Greed for a Trifling Thing Led a
Man to Lose a Great One ..... 6
IV Who "Was the Sinner? 9
V The Magic Cask .10
VI The Favorite of Fortune and the Child
OF III Luck 11
VII The Bird with Nine Heads 13
VIII The Cave of the Beasts . . 17
IX The Panther 20
X The Great Flood 24
XI The Fox and the Tiger 27
XII The Tiger's Decoy 28
XIII The Fox and the Raven 29
Download PDF book 7.5 MB