The Argonautica of Apollonius Rhodius 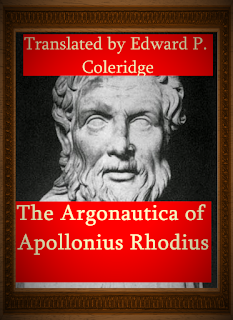 Apollonius Rhodius was born about B.C. 235, the reign of Ptolemy Euergetes, either at Alexandria or at Naucratis. Strabo is in favour of the former, while Athenseus and ./Elian declare for the latter place. He appears to have given himself up at an early age to literary pursuits, and his choice is scarce to be wondered at when we reflect upon the age in which he lived and the literary atmosphere in which he found himself.
We are not expressly told whether it was choice or necessity that led him to select the career he did, but from the fact that the leading poet of that day took the young aspirant in hand and instructed him in his art, we may fairly infer that Apollonius was a man of some standing and position in life. His studies, however, under his master Callimachus were not destined to do either pupil or teacher much credit; no doubt he obtained some technical skill in his art, but the tastes of Callimachus and Apollonius were so diametrically opposed that the two poets quarrelled, and allowed their professional jealousy to go to such lengths that Apollonius lampooned the style of his teacher, while Callimachus was weak enough to retaliate in a studied retort under the title of *' Ibis," the character of which poem, though lost to us, maybe gathered from Ovid's poem of the same name.
Callimachus was the leading exponent of the strained and artificial poetry of his day. Apollonius, with more true artistic instinct, revolted from the want of reality characteristic of most of his contemporaries and having a genuine admiration for the straightforward simplicity of the Epic age, set himself to imitate Homer. Naturally, he made many enemies among the host of poetasters who took their cue from the animosity shown to him by the " Laureate " of the Alexandrine court. Hence, when the " Argonautica " appeared, it was at once condemned as violating the accepted canons of style and composition, and partly, perhaps, owing to certain youthful crudities which were afterwards corrected. Great was the chagrin of the young poet at the reception of his work, and fierce was his anger against Callimachus.
The position of the latter, however, was unassailable, and so Apollonius, after fruitless wordy warfare, determined to seek some new opening for his genius. Accordingly, he bade farewell to ungrateful Alexandria and retired to Rhodes, then the second great seat of literature, taking his poem with him.
The Argonautica differs in some respects from traditional or Homeric Greek epic, though Apollonius certainly used Homer as a model. The Argonautica is shorter than Homer's epics, with four books totalling fewer than 6000 lines, while the Iliad runs to more than 16,000. Apollonius may have been influenced here by Callimachus's brevity, or by Aristotle’s demand for "poems on a smaller scale than the old epics, and answering in length to the group of tragedies presented at a single sitting" (the Poetics). Wikipedia
Download Zip file contains PDF 9 MB.