The analects of Confucius 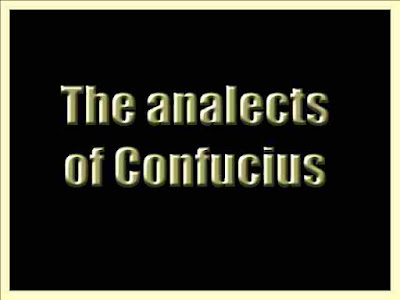 The Discourses of Confucius, commonly known as the Analects, no student of Chinese, least of all the missionary, can afford to neglect.
In this brief treatise is revealed to us, more or less fully, the mind of Chinas most illustrious son, and consequently the mind of his race at its best. Here is the model on which for two thousand years this people has blocked the plastic mass of its mind and character.
To understand the matrix is to understand at least the form if not the material of the impression, and in this book, we have the die from which millions have been minted, sometimes of fine, more oft of baser metal. Nevertheless, however, varied the substance, the form sought after has ever been the same, and he who understands the revelation of China's model of wisdom, grace and honour herein exhibited, will also apprehend what is the noblest ideal, however imperfect, that this multitudinous race has set before itself.
He will, too, by this means come into so close a mental touch with its aspirations as to see distinction and dignity where before a swamp of mental and moral stagnation may have seemed to be his sole environment. If anyone asks why another translation be presented, the reply offered is that this work receives less attention at the hands of the student than its importance deserves, and a new issue will at least once more draw attention to its existence and value. Should a further explanation be demanded let it be that, except in an emasculated form, Dr Lcgge s scholarly work is no longer within the reach of the student of limited means; that that work was published long before the majority of the students of today were born; and that, justly or unjustly, its phraseology has been criticised as too formal to make the Analects express to an English what they do to a Chinese mind. My plan of work has been to make, in the first instance, an entirely new translation, without any reference to the interpretations of my predecessors.
On the completion of such translation, I then sought the invaluable aid of Dr Legge, of Pere Zottoli, and of H. E. Ku Hung-Ming. Dr Legge s monumental work on the Classics is too well-known to call for further mention; he has been my guide, philosopher and friend.
The more I see of his work the more deeply am I impressed with his profound scholarship, his painstaking accuracy, his amazing research, and his perspicuity of expression. PereZottoli s version, published in 18/9, is in Latin and may be obtained ed in his Cursus Literature Siniciu, which covers the whole range of the Chinese classical education of a decade ago. H. E. Ku s work was published in 1898, under the title, "The Discourses and Sayings of Confucius," and the student is indebted to him for a rendering which is doubly valuable as expressing in fluent English an educated Chinaman s interpretation of this Classic. Zottoli s is an admirable work, though often marked by exceedingly close adherence to the text; its rigidity of phraseology is uncalled for in an English rendering.
Ku's version on the other hand, is made for English readers unacquainted with the Chinese tongue, is more a paraphrase than a translation, hence the liberality of expression he allows himself presents a view of the Analects, by no means always Confucian, that is not to be looked for in the pages of translators more constrained by canons in general acceptation. Legge s work while eminently a translation and not a paraphrase, is by no means slavishly literal, for his treatment of his " Author," albeit perhaps like his Author with a touch at times somewhat heavy, is always both sound and sympathetic, and as to his Introduction, it is a revelation of patient indomitable scholarship. To these three works, then, I have often been indebted for the correctness of apprehension, and in some cases also for choiceness of phrasing.