"Tell it all": the story of a life's experience in Mormonism 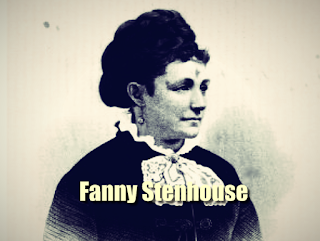 Fanny Warn Stenhouse was an early Mormon pioneer who defected from The Church of Jesus Christ of Latter-day Saints and was most famous for her 1872 publication Exposé of Polygamy in Utah: A Lady’s
Excerpt:
In the fall of Jthe year 1869, a few earnest, thinking men, members of the Mormon Church, and having in Salt Lake City, inaugurated what was regarded at the time as a grand schism. Those who had watched with anxiety the progress of Mormonism, hailed the " New Movement " as the harbinger of the work of disintegration so long anticipated by the thoughtful-minded Saints, and believed that the opposition to Theocracy then begun, would continue until the extraordinary assumptions of the Mormon priesthood were exploded, and Mormonism itself should lose its political status and find its place only among the singular sects of the day.
It was freely predicted that Woman, in her turn, would accept her part in the work of reformation, take up the marriage question among the Saints, and make an end of polygamy. Little did I imagine at that period, that any such mission as that which I have since realised as mine, was in the Providence of Time awaiting me, or that I should ever have the boldness, either with tongue or pen, to plead the cause of the Women of Utah. But, impelled by those unseen influences which shape our destinies, I took my stand with the " heretics;" and, as it happened, my own was the first woman's name enrolled in their cause.
The circumstances which wrought a change in my own life produced a corresponding revolution in the life of my husband. In withdrawing from the Mormon Church, we laid ourselves, our associations and the labours of over twenty years, upon the altar, and took up the burden of life anew. We had sacrificed everything in obedience to the "counsel" of Brigham Young; and my husband, to give a new direction to his mind and also to form some plan for our future life, thought it advisable that he should visit New York.
Download PDF book 15 MB