"Son of man;" or, The sequel to evolution 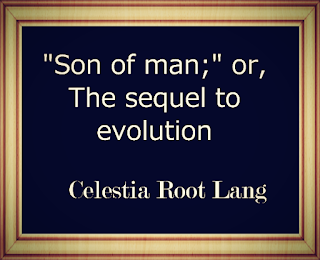 The children of evolution are asking for spiritual bread. Has evolution nothing to give them but a stone? Or, if they ask a fish, will evolution give them a serpent? When we realize that " God is without body, parts, or passions," — pure, in- visible, intangible spirit, — the soul asks for more knowledge. Science has forever exploded the low view of God, which regarded, and regards, him as a sort of man, and has taught us that a close and vital union exists between him and nature. What we want not is a scientific theory of this union.
A Preface seems like an apology in one form or another, but I have no apology to make. I have done the best I could to clothe my idea of the divine principle, or Christ in nature, in scientific language. It may be that, to that pro- fondly versed in science, my handling of these subjects may seem crude. I advise such to confine themselves to the idea. I think they will find that a harmonious whole. My idea of psychic evolution is based upon Professor Joseph LeConte's explanation of evolution.^ His explanation has been the terrace, so to speak, on which I have stood to draw this outer circle. Our experience is proof that every action admits of being outdone; that around every circle another can be dra^vn. That my work, in turn, will form the terrace on which someone will stand to draw another circle is the hope of the Author.
What is needed above all things is a scientific theory which will form the between the old and the new views. Evolution affords the very strongest evidence of the existence of infinite intelligence and will back off and in nature. It is not, however, my purpose to undertake to prove the existence of that part, so to speak, of Deity hack of nature, since all that is necessary to say on that point will be said incidentally in the following pages. But my aim is rather to give a scientific theory of that part, so to speak, of Deity in nature. Bruno, the precursor of the modern Pantheistic philosophers, held that the infinite soul of God did not merely inhabit or pervade the universe, but that the universe was simply a manifestation of him, therefore itself divine.
God was, therefore, in the most literal and physical sense, all in all. Although we cannot think of Deity as one " whose body nature is," a slight infusion of pantheism is wholesome and necessary to correct an excessive doctrine of individualism, and to perfect the conception of God, and our idea of God's immanence in nature, and his psychical or spiritual nature; and that the Infinite Power of which the universe is the multiform manifestation is psychical. Then psychic evolution ought to furnish the solution of the problem, so far as it can be solved. We may have a true though not a complete knowledge of the nature of this union, i.e.^God in Nature, that is, a knowledge co-extensive in every feature with its subject.
Download