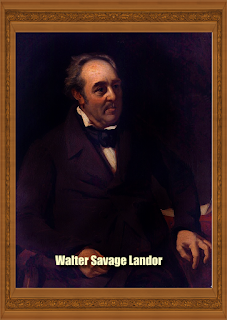 Walter Savage Landor was born at Warwick, on January 30, 1775. His father, Dr Landor, a practising physician at Warwick, reputed to have been a "polished, sociable, agreeable, somewhat choleric gentleman, more accomplished and better educated, as his profession required, than most of those with whom he associated, but otherwise dining, coursing, telling his story and drinking his bottle without particular distinction among the rest," had married two heiresses.
Of the seven children by the second wife, Elizabeth Savage, a member of a Warwickshire family, Walter was the eldest. By entailing he became heir, at birth, to two estates belonging to his mother's family — Ipsley Court and Tachbrook in Warwickshire; to a share in the reversionary interest in a third — Hughenden Manor in Buckinghamshire;  and to the family property of his father in Staffordshire.
" No one, it should seem," says his latest biographer, "ever entered life under happier conditions. To the gifts of breeding and of fortune there were added at his birth the gifts of genius and of strength. But there had been evil god-mothers beside the cradle as well as good, and in the composition of this powerful nature pride, anger, and subsequently, the country seat of another man of literary fame, Benjamin Disraeli, who in 1848 purchased the place, and on the refusal by his executors of the offer of a public funeral and Westminster Abbey was, in accordance with his express directions, buried there beside Lady Beaconsfield in 1881.precipitancy had been too largely mixed, to the prejudice of a noble intellect and tender heart, and to the disturbance of all his relations with his fellow-men."
Download