Selections from the British satirists 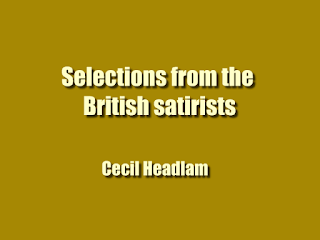 It is useful, in considering a subject of so large and so vague a character as satiric writing, to attempt a definition of it. A definition is always the best introduction to a discussion. But satire is so elastic a term — it is used to denote a form of literature which at one time includes, and at another excludes, so many different elements — that it is im- possible to define it accurately.
Satire may be frankly personal, with no other object than that of private revenge, or professedly general, with the avowed object of improving public 'morals. For all satire is not moral, any more than all moralizing is satire. Though we are apt to look for an air of moral superiority and of moral intention in the satirists, we do not always find these qualities.
Wit, humour, sarcasm, irony, invective, ridicule, burlesque — all these find a place in satiric writing, but it is difficult to determine how far any one of them is necessary to this species of literature; so that it is perhaps best to be content with saying that satirical writers are the censorious critics of life, literature, and manners — critics, in fact, of everything and of everybody except themselves — and that they use one or more of the above-mentioned weapons.
Satire itself, it will then follow, is a matter of critical intelligence. It is founded on intellect and wit rather than on imagination; but when wit and intellect are combined with the creative faculty, there we find the most effective because of the most pleasing, the most ironic, and the most subtle form of satire. This kind of composition will naturally be most popular, and attract the greatest writers during those periods of literature when men's thoughts turn from the passions to politics, from sentiment to a study of social phenomena; when, in fact, the critical predominates over the imaginative faculty. The triumph of reason and the stir of politics at the time of the Reformation are reflected in the writings of Skelton, and a hundred years later age of argument and criticism finds expression in such writers as Marvell, Butler, Dryden, Swift, Pope, and Addison.
Download