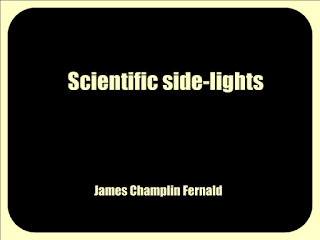 illustrating thousands of topics by selections from standard works of the masters of science throughout the world.
The material in this book can be absolutely relied upon. In using it, the student may be sure that he is dealing with masterminds, each of whom has made a speciality of the science of which he treats. The editor has kept steadily in view the duty of a compiler.
He has refrained from making digests, compends, or summaries of the works reviewed. He has not under-taken to advance any opinion, theory, or creed, but simply to give the fairest possible picture of the present state of science consistent with the primary purpose of the work as a volume of illustrations.
Where eminent men differ in opinion, conflicting views have been allowed the expression, leaving the name and authority of each author to answer for his own statements. The recording of a scientific opinion is not its advocacy, and that even leaders in science may well change their views with advancing knowledge is abundantly shown in the selections given, and freely admitted by the foremost among them. In obedience to the primary and controlling purpose of scientific illustration, whatever in science can throw a ' 'side-light" upon some intellectual, moral, political, industrial, social, or religious truth has been seized wherever found.
The titles and location of topics are thus not what would be found in a scientific handbook, which would place all matter treating of glaciers under the glacier, of oxygen under oxygen, of volcanoes under the volcano, etc. It is not primarily for the astronomical, geological, chemical, or other scientific teachings that the selections have been made, but for some truth relating to humanity, which they illustrate. At the same time, it is believed that the selections will be found of exceeding interest for their own sake and that they will open to many readers vistas of the wide reach of science, such as their special studies have not previously brought to their view.
The minister, the teacher, or the busy worker in any profession, even if he devotes his spare time to science, can scarcely hope for extensive knowledge in more than someone of its many departments. Through these pages, flashes of light will come to him from all, and he will thus gain a fuller view of the grand unity toward which all are tending.
Of the use of scientific illustrations in speaking or writing, it may be said that they are in harmony with the spirit of the age, which is preeminently scientific; that they have not the hackneyed character of the numerous popular anecdotes or of the stock illustrations long current in classic literature, and that they especially impress the thoughtful mind, as dealing with facts. However theories may change, the movements of suns and planets, the combinations of chemistry, the fossils and strata of geology, the properties of heat, light, and sound, the marvels of electricity, and the infinitesimal world of the microscope are facts, ascertained and demonstrable. The mind is thereupon sure ground, and the use of such facts in illustration gives a sense of certainty and reality to the thoughts they are employed to illustrate.
Download Scientific side-lights 46 MB PDF book