"Quo Vadis": a narrative of the time of Nero 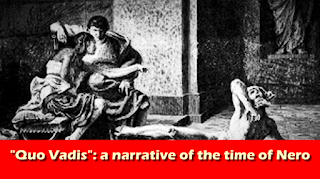 In the trilogy " With Fire and Sword," " The Deluge," and " Pan Michael," Sienkiewicz has given pictures of a great and decisive epoch in modern history. The results of the struggle begun under Bogdan Hmelnitski have been felt for more than two centuries, and they are growing daily in importance.
The Russia which rose out of that struggle has become a power not only of Europe but of worldwide significance, and, to all human seeming, she is yet in an early stage of her career. In " Quo Vadis " the author gives us pictures of opening scenes in the conflict of moral ideas with the Roman Empire, a conflict from which Christianity issued as the leading force in history.
The Slavs are not so well known to Western Europe or to us as they are sure to be in the near future; hence the trilogy, with all its popularity and merit, is not appreciated yet as it will be. The conflict described in " Quo Vadis " is of supreme interest to a vast number of persons reading English; and this book will rouse, I think, more attention at first than anything written by Sienkiewicz hitherto.
Download 28 MB PDF book