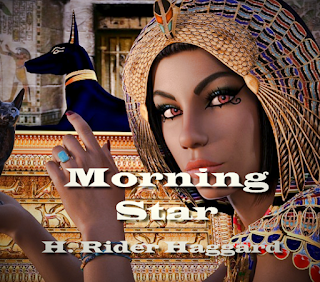 The story of the great queen of Egypt Neter-Tua, daughter of the god Amen-Ra,
The Morning Star. A fantasy romance story set thousands of years ago in Egypt with elements of the supernatural featuring strong female leads. Pharoah's daughter, Neter-Tua, under the protection of the god Amen-Ra, must overcome the murder of her father and other plots by her uncle to rule Egypt and marry her love, Rames.
Excerpt from the novel

But what will happen, Tua? Either the King of Kesh will kill him and my two thousand soldiers, or perhaps he will kill the King of Kesh as he killed his son, and seize the throne which his own fore- fathers held for generations. Have you thought of that?

After some months had gone by Pharaoh, quite weary of this play, asked the advice of his Council. They suggested to him that he should journey through the great cities of Egypt, both because the change might completely re-establish his divine health, and in the hope that on her travels the Queen Neter-Tua would meet someone of royal blood with whom she could fall in love. For by now it was evident to all of them that unless she did fall in love, she would not marry

They led her to its greatest palace that had been prepared for Pharaoh and herself, a place surrounded by palm groves in the midst of the city, but having studied it with her quick eyes, she said that it did not please her. So search was made elsewhere, and in the end she chose another smaller palace that once had been a temple of Sekhet, the tiger-headed goddess of vengeance and of chastity, whereof the pylon towers fronted on the Nile which at its flood washed against them. Indeed, they were now part of the wall of Memphis, for the great unused gateway between them had been built up with huge blocks of stone.

" Before we part, my guests, let Memphis drink a welcome to the mighty Lord of the Two Lands who, for the first time in his long and glorious reign, honours it with his presence here today. As he said to me but now, my royal brother is weak and aged with sickness, nor can we hope that once his visit is ended, he will return again to the White-walled City. But as it chances the gods have given him a boon which they denied for long, the lovely daughter who shares his throne, and who, as we believe and pray, will reign after him when it pleases him to ascend into the kingdom of Osiris.