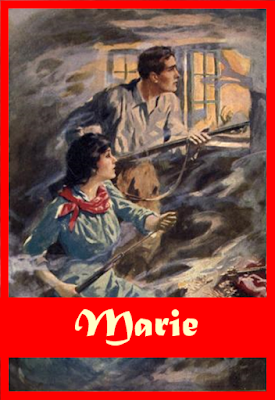 Marie is a 1912 novel by H. Rider Haggard featuring Allan Quatermain. The plot concerns Quatermain as a young man and involves his first marriage, to the Boer farm girl, Marie Marais. Their romance is opposed by Marie's anti-English father, and her villainous cousin Hernan Pereira, who desires Marie. T
They are Voortrekkers who take part in the Great Trek whom Quatermain has to rescue. The novel describes Quatermain's involvement in the Sixth Xhosa War of 1835 and the Weenen massacre. Real-life people such as Piet Retief, Thomas Halstead, and the Zulu chief Dingane appear as characters. Events in Nada the Lily are frequently referred to.
Wikipedia
Review by Sandy
This is one of the best works by H. Rider Haggard that I've read, and I've read a good number of them. This is the tale of how Allan Quatermain, hero of 14 of Haggard's books, including "King Solomon's Mines," met his first wife. It is set against the time of the Great Trek in the 1830s and is jammed with action, adventure and romance.
Illustrated by A. C. Michael
Publication date: 1912
Download