with historical and explanatory notes
In collecting t 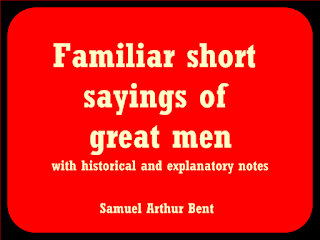 rue and notable sayings, and happy thoughts flashed in the heat of controversy or the war of wit, I have taken no account of what men have written in books, save as such written words illustrate their own or others' speech; nor will all the sayings of ancient or modern times be included in five hundred pages.
Such a compilation would be as impossible as to bring into one volume every historic event which has stirred man to heroic utterance, or every idea with which the sublime and the beautiful have inspired the scholar and the poet. Too liberal and intention has not been given to the title, "Great Men."

Those who remember Lysauder's maxim, that, " where the lion's skin fails to reach, it must be pieced out with the fox's," may ask if it is the lion's robe which covers both Julius Caesar and Sir Boyle Roche. If so, they have forgotten that Goethe did not confine his question to the clever things which one century borrows from another, even dullness has its place: " Who can think wise or stupid things at all, That was not thought already in the past? "
Download 32 MB PDF book