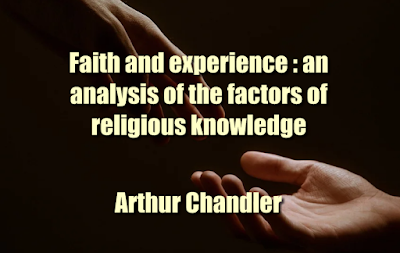 Excerpt:
It is a characteristic of our time that many rivals and exclusive theories of religious knowledge are always making their appearance. Each theory tacitly or explicitly claims to occupy the whole ground, and to be the doctrine of Christian epistemology. And great is the confusion and perplexity which results. A man who has been living for years in the tranquil profession and practice of his religion wakes up one morning to hear himself, to his dismay, described as a “ charcoal-burner/' with the obvious implication that his faith is irrational and worthless. If he alleges in defence that he tries to listen to God's voice, and believes that * he hears it speaking in his heart, and that therein he finds a justification for his religion, he finds himself labelled, either approvingly or contemptuously, as a Mystic and a Quietist. If he pleads that his faith verifies itself for him in the practical help which it gives him in times of trouble and perplexity, he learns that, without knowing it, he has been a Pragmatist and a Modernist all his life, and is doubtful whether this is to his credit or not. If in despair he goes back to the Gospel and declares that there, at any rate, is the sheet-anchor of his beliefs, he will be met by the curt inquiry whether by “ the Gospel ” he understands a system of 11 apocalyptic eschatology” or one of “ ethical-religious prophecy. And by this time the unfortunate man hardly knows where he is, or whether he has any right to call himself a Christian at all.
This book is a protest against this militant exclusiveness; it is an attempt to weave together some of the main threads which go to form the fabric of religious knowledge.
There are many such threads, of different shades and materials; for religious knowledge is a rich, complex, many-coloured product. But the two main factors may be classified roughly as Faith and Experience. By Faith I mean the intellectual acceptance of certain rational principles and historical facts; by Experience, the operation of a whole multitude of instincts, desires, and impulses which make up the affective and volitional nature. I have tried to show in some detail how religious knowledge results from the interaction of these two factors, and how an exclusive attention to either of them by itself means failure and disaster. It is not necessary here to anticipate the course of the argument; in the last chapter, I summarize the results arrived at.
Download PDF book