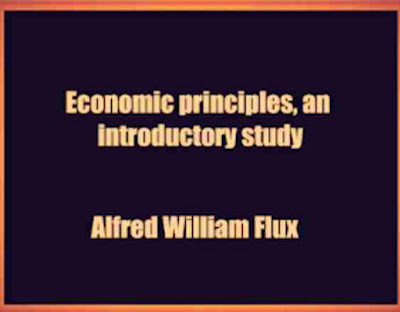 From Introduction:
This volume contains hardly any references to the writers who have built up the theories of economics and given them the form which renders them useful in understanding modern economic facts. In omitting these references, my desire has been, not merely to avoid introducing controversies which can only interest students more advanced than those for whom I wrote, but also to retain freedom of expression which I must have denied myself had I assigned each point of doctrine to those who first, or most clearly, gave it expression.
I should like to express my indebtedness to many recent writers, and, if I have given an interpretation of them, here and there, somewhat different from their own, I trust that I have not lost the essence of their doctrines, so far as I am able to accept them.
No Cambridge student of economics in recent years can fail to have gained inspiration from contact with Professor Marshall, and the writer is conscious of a very special obligation to the teacher to whom he owes his chief guidance in economic study. As with others, so especially in this case, the acknowledgement of inspiration carries with it no attempt to place a burden of responsibility for either the form or the substance of what is written here.
The text contains no explicit reference to the mathematical apparatus which has rendered eminent service in economics, especially in recent years. Some of the simpler applications of algebraic symbols and geometrical diagrams to economic problems are presented in an appendix
. Those to whom these forms of expression tend rather confuse than to clarify the reasoning which they embody, may thus readily spare themselves this confusion; while those to whom these symbols are familiar and helpful will not be deprived of the aid to the precision of conception and of argument which can hardly be afforded in equal degree by any other means. Readers who desire to pursue something more than an introductory course of economic study will find a few references to the more accessible works in the English language in the table of contents.
SOME CONTENTS:
CHAPTER I
INTRODUCTORY
Authorities
Cossa . . . " An Introduction to the Study of Political Economy."
Bagehot . . " Economic Studies,'' Essays I. II. III.
Keynes . . " The Scope and Method of Political Economy."
Marshall. "Principles of Economics," Books I. and II.
In economics, we study the complex organisation of communities, the sources of their wealth, the shares claimable by their members, and the allocation of tasks to individuals which result from the choice of occupation freely exercised under the stimulus of the rewards obtainable. Though not entirely free, this choice is effective in its exercise. Goods denned. Personal qualities conducing to effective production are considered. National and individual wealth. Productive and unproductive labour. The necessaries of physical existence are not more rigorously required than conventional necessaries. Waste.
Value in use and value in exchange. Wealth comprises valuable utilities. Ex- change the pivot on which modern economic life turns. Divisions of the subject: production, distribution and exchange, consumption. The historical and a priori methods of study are mutually helpful. Premises of economic argument. Action from self-regarding motives, the principle of population, the principles of diminishing returns and of diminishing utility, intelligent action and competition. Not all these are universally applicable, even if generally so. Capital is the means of future production. Income of direct satisfaction or of money. Trade-capital and consumption capital. Land, not capital, though much of its value is due to capital . . . . . . i-
CHAPTER II
DEMAND AND VALUE
Authorities
Marshall. . " Principles of Economics," Book III.
Jevons . . . "Theory of Political Economy," Chapter III.
Wieser . . . "Natural Value," Book I.
Pantaleoni. " Pure Economics," Chapters III. IV. Valuations of goods and services guide economic activity in all departments. Value is not inherent in goods, but results from their relation to wants. The wants of different persons are not comparable, but the prices they pay for equal means of satisfaction can be compared. Demand-price, its variation with the amount of supply. The exception to the principle of diminishing utility, apparently, when goods in general, rather than some particular good, are concerned.
What constitutes satiety? The desire for a variety of satisfaction. Order of urgency of wants. A distinction is an object in conspicuous expenditures. New orders of wants develop as resources expand. The elasticity of demand and its measure. Utility afforded by goods is not decreased when additional supplies of them permit their use in affording lesser utilities. Intra-marginal utilities secured at equal cost with marginal utilities
. The total utility of a supply of goods is a measure of the importance of that supply. Commodities of great im- portance may have a small value. Decrease of values of goods conducive to welfare, which is yet not a consequence of the decrease of wealth. Need stimulates to exertion while unearned abundance leads to stagnation. Changes of demand due to changes in values of goods or to changes in the need for them. Only the latter involves a real change of conditions of demand .....
\
Sir Alfred William Flux CB was a British economist and statistician. Flux was born in the Landport district of Portsmouth in 1867, the son of a cement maker. He attended Portsmouth Grammar School then studied mathematics at St John's College, Cambridge where he was a Senior Wrangler in 1887.
Publication date: (1904)
Download 8 MB, PDF book