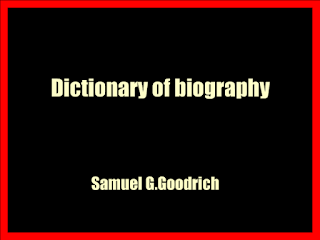 The English word, of which this is substantially a reprint, was prepared with care and accuracy and brought down to the end of the year 1831. Various alterations and improvements have been made, and several European, and about three hundred American names have been added in the present edition. It is now believed to be a correct and convenient manual of biography, and well adapted to the wants of the American Public.
Example: 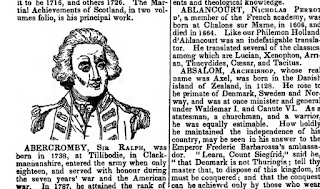 \
Example
ABERCROMBIE, John, a horticulturist, was the son of a person of the same profession, near Edinburgh. At the age of eighteen, he came to London and was employed in one of the royal gardens. He died in 1806, aged eighty. Various works on gardening were published by him; but the most popular is the Gardener's Calendar, which was originally given to the world as the. production of Mr Mawe, who was at that time better known to the public than the real author was.
the author is Samuel Griswold Goodrich, better known under his pseudonym Peter Parley, was an American author.
Download 23 PDF book