Chambers's encyclopaedia;  (1860) a dictionary of universal knowledge for the people 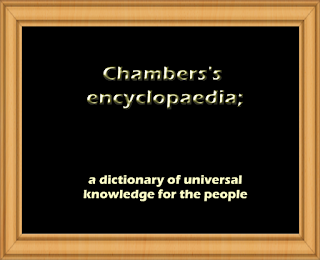 Before publishing an encyclopedia, Chambers produced a smaller publication, Chambers's Information for the People.
This began as a serial publication in 1835. Like the Penny Cyclopaedia, and others of the time it was meant to be a cheap reference work that was targeted at the middle and working classes. Hence, it focused only on subjects that would be of interest to the common man and pertinent to his self-education. It also eschewed the bulky format that and "found it necessary to disregard all common idea as to what constitutes dignity in the externals of books". The undertaking was a success, selling seventy thousand issues in its first year.
The original edition consisted of 48 numbered "treatises", plus an unnumbered introductory treatise "An Account of the Earth, Physical and Political." Improved two-volume editions were published in 1842 and  A third improved edition appeared in 1857.,[6] shortly before the Chambers Brothers publication of the first edition of their major encyclopedia in 1860. Further new, two-volume editions were published in 1875 and 1884, both of which are denominated the Fifth edition
Download 52 MB PDF book, Read big files on PC for the best experience