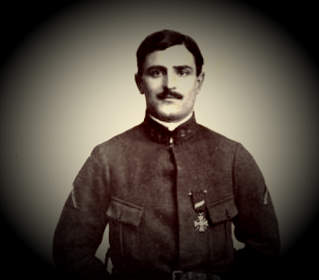 We have hitherto had many volumes of the doings of British soldiers at the front and in captivity, but few of our French Allies. The experiences of Monsieur J. Martin, written originally in French, give such a vivid picture of prison life in Germany, that they have an interest far beyond the mere personal one which his friends and countrymen attach to his name. Brought up in France, amidst all the charm and culture of the best French -Protestant traditions, he was educated at Rouen, and he finally took his degree in 1912. During his studies, he spent much time in England, where his charm of manner and chivalrous spirit made him many friends.
Moreover, his love for games brought him in close touch with our people, and he won great credit for himself on the football field. Before the outbreak of war, while staying with friends in a country village, near one of the 9 garrison towns in Ireland, he made acquaintance I with some of our Irish soldiers quartered there at the time; little thinking how soon he would meet them again in very different circumstances, for, by a strange coincidence, he not only found them sharing his captivity in the first prison camp in which he was interned in Germany but also, owing to his knowledge of the language, he was appointed as interpreter to the British soldiers.
His first thoughts were to help them, by in- forming friends of their terrible condition. In this, he succeeded, and it was through his postcards that the British public first heard of their most pressing needs. Many long months elapsed in the prison camp which he so graphically describes, and the intimate details which he gives of the life must prove of intense interest to all who have relations and those dear to them still suffering in captivity. The reader may imagine the joy of his friends when his telegram reached them one day in July 1915 — " Escaped, safe in Holland." Arrangements were hastily made to enable the escaped captive to travel to I^ondon without a moment's delay. Worn out and exhausted, he was granted leave to recuperate in Ireland, and in less than a fortnight from the moment of his escape, he alighted from the train at Tipperary and realised that he had accomplished the "Long, long way" which he had so often joined in singing with the Irish soldiers in the camp.
Download