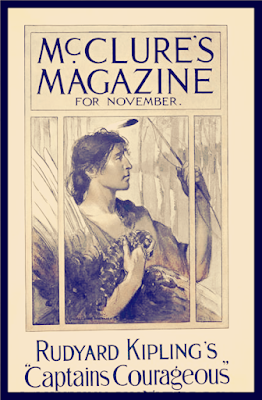 Captains Courageous is an 1897 novel, by Rudyard Kipling, that follows the adventures of fifteen-year-old Harvey Cheyne Jr., the spoiled son of a railroad tycoon after he is saved from drowning by a Portuguese fisherman in the North Atlantic.
This novel is full of adventures and a good plot, the novel also was turned into a movie
Joseph Rudyard Kipling was an English journalist, short-story writer, poet, and novelist. He was born in India, which inspired much of his work. Kipling's works of fiction include The Jungle Book, Kim, and many short stories, including "The Man Who Would Be King".
Kipling said:
When, at the end of my tale, I desired that some of my characters should pass from San Francisco to New York in record time, and wrote to a railway magnate of my acquaintance asking what he himself would do,
Download PDF book