A cyclopaedia of Greek and Roman biography, geography, mythology, and antiquities. 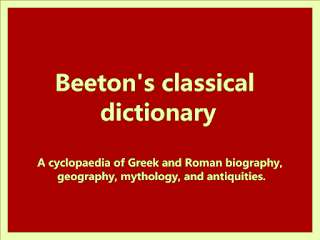 Excerpt:
Until the advocates of the Ancient Literature shall ^be silenced by their opponents, and it be universally agreed that an end of the glories of Greek and Roman Classics, both of History and Fable, is come — until then, — a remote future, in our hope — the Classical Dictionary will be needed, in its own language, by every community of civilized people.
Mr Cobden was wont to extol the news of The Times to the disparagement of the narrative of Xenophon, but he would have been one of the first to acknowledge that the man who had read and studied the ancient historian would have been all the better able to appreciate the modern journalist. Pretty much of a truism would it be to extend the observation, and declare that he who knows the ancient authors is in a fair way to profit by his acquaintance with the writers of his own language, and with Modem Letters in all its branches.
Screenshot

To understand the Newspaper, the Magazine, or Book of today, to follow the Discoveries of Science, to fitly admire the Triumphs of Art, to participate in the Discussion of Politics — to do either or all of these things with advantage and benefit, a knowledge of the more ordinary Classic Proper Names is absolutely indispensable. Neither is it possible, without some acquaintance with Ancient Story and Fable, to read intelligently and profitably the English verse of Shakspeare or Milton, the essays of Lord Bacon or the Sieur de Montaigne, the modern writings of Lord Macaulay or Thomas Carlyle.
What dire calamity, also, overtakes the author of the unhappy utterance of a false quantity in the society of learned and cultured men, and, notably, in either House of Parliament. With what fear and trembling does many a man of the people — self-made and uninstructed early — approach a reference to Classic Geography and Biography — say Spartan Menelaus or sceptred MelpoLiene — lest, awakening the wrath of the Eumenides, he should fall into the realms of Orcus, son of Ops, and find no Orpheus to release him from the bondage of Pluto and Proserpine. Let men determine that Mount Olympus must serve as the physical example for mortals to follow. Its base was Earth, but its head touched Heaven. So should all men — if necessary it is to labour daily, keep shops, and write accounts, for dear bread below — ascend by times to the higher life, and air their better natures in the gentle airs of Celestial Spring which blow upon the summits of the Classic Height.
Download PDF book 21 MB