A vital question; or, What is to be done? 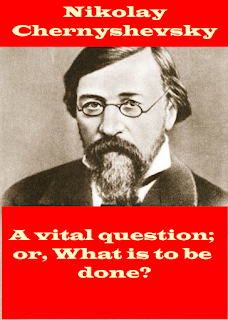 Nikolay Gavrilovich Chernyshevsky was a Russian literary and social critic, journalist, novelist, democrat, and socialist philosopher, often identified as a utopian socialist and leading theoretician of Russian nihilism.
In the present translation, the American public has an opportunity of studying what the paternal Russian government regards as revolutionary literature. In the Russian cities, it is possible, by offering guarantees, by depositing fifteen or twenty rubles, and by paying fifteen or twenty kopeks a day, to borrow Tchernuishevsky's novel from the libraries. It is dangerous property, however, and the person caught with it in his possession may make an unpleasant acquaintance with the police. It was published first in the columns of the " Sovremennik " (Contemporary). It was written with all the enthusiasm which an ardent soul could feel at the first breath of liberty blowing on a land long ground down under the heel of oppression.
Translated by Nathan Haskell Dole,  and  S. S. Skidelsky
Download PDF book