A handy book of curious information: 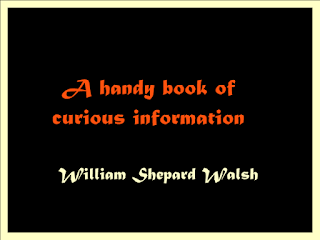 comprising strange happenings in the life of men and animals, odd statistics, extraordinary phenomena and out of the way facts concerning the wonderlands of the earth
The series of handy books which reaches its third volume with the present publication, — and which is to be continued in the future if this third volume meets with the favour that was accorded to its predecessors, — is primarily designed as a sort of supplement to the Encyclopaedias.
It exploits either such subjects as are deemed, beneath the dignity of more pretentious works or else such lighter aspects of familiar subjects as are similarly ignored by the Big Wigs. , For an example of the second group, take articles like Bullfights and Playing Cards. Nothing can be triter than the subjects themselves, but the special information here supplied would be looked for in vain in authoritative books of reference. Examples of the first group may be found on almost every page.
They comprise the sort of " ana " that a host of readers are curious about. They form, in fact, the staple of the inquiries which are constantly addressed to the Correspondents' Column in our daily journal and are usually " left to our readers " and remain unanswered.