A guildsman's interpretation of history 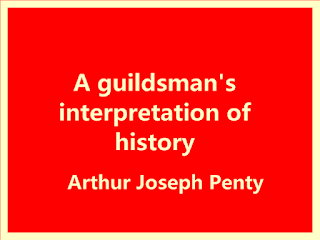 Arthur Joseph Penty was an English architect and writer on guild socialism and distributism. He was first a Fabian socialist, and follower of Victorian thinkers William Morris and John Ruskin
Review on this book:
" The Guild Socialist Movement has its many exponents, but Mr Penty contrives at once to be exponent and critic. . . . There are signs in plenty that Guild Socialism is the next popular social doctrine with which we have to reckon."
-Mr G. K. Chesterton in the " New Witness "
" We wish some of the honest elements roughly covered by the National Party would read such a book as Mr A. J. Penty's ' Old Worlds for New '; and they might not talk so excitedly or at least so exclusively about Maximum Production. . . . Even the few short words of Mr Penty's title contain a wide challenge to the progress of the modern world; they are not only a parody on Mr Wells but a very valid comment on him."
-The Herald
" The book should be read by all who are anxious about altering the present conditions. It has much permanent value, and it is provoking and stimulating. It is a terrible bore to read a book with which you agree in every detail. You usually go to sleep. No one will do this, however, that reads ' Old Worlds for New.'"
-Manchester Guardian
Excerpt:
the primary object of this history is to relate the social problem to the experience of the past and so to help bring about a clearer comprehension of its nature. ' The reason," says the author of Erewhon, " why we cannot see the future as plainly as the past is because we know too little of the actual past and the actual present. The future depends upon the present, and the present depends upon the past, and the past is unalterable."