A guide to the best fiction 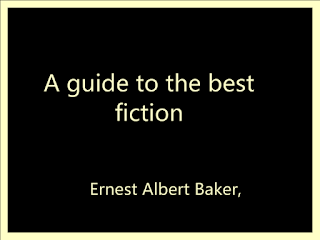 A Descriptive Guide to the Best Fiction( British and American) published in 1903, of which the present book is a new edition very much enlarged and almost entirely re-written, went rapidly out of print. History in Fiction, a guide to historical novels and tales, in two volumes, is still in print but deals with only a portion of the subject. Both works have proved of real use to librarians, booksellers, writers, and students, and it is hoped that the present volume, which is virtually new work, will prove even more so.
Its object, as stated in the original Preface, is to supply a fairly complete list of the best prose fiction in English, with as much characterization of the contents, nature, and style of each book as can be put into a few lines of print. It does not claim to be a bibliography, in the stricter sense of the word, although it supplies all the bibliographical particulars required for identification and other general purposes. Long titles are frequently abbreviated; sub-titles, when they are descriptive, often appear in the notes. The dates given are those of the first publication of each work in book form, the date of serial or other publication is added only when it is of special interest,
A very large number of books that are now out of print have been included, when of sufficient importance — the fact being indicated in the notes. Many interesting novels that had been long out of print at the time of the first edition of the Guide have since been reprinted, and it is hoped that it is worthwhile calling the attention of publishers again to many which have since gone out of print or still remain forgotten. This remark applies especially to scarce translations of foreign novels. In fact, the author has gone so far as to include a few works by foreign novelists (e.g. certain novels by Octave Feuillet, Villiers de I'lsle-Adam, and even such popular writers as George Sand, Edmond About, Jules Sandeau, and Marcelle Tinayre) which have unaccountably escaped the attention of translators.
No attempt has been made to enlarge the scope of the Guide by dealing with foreign fiction as a whole or even to include all that has been translated into English if such translations are now difficult to obtain. This would have involved an enormous amount of additional work, which may, however, be undertaken when a new edition is called for.
Download 55 MB PDF book for big file use your computer for the best experience