A century of revolution 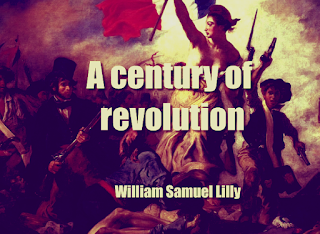 A Century has passed away since the Duke of Lianconrt brought to Louis XVI. the tidings of the capture of the Bastille by the Parisian mob. "It is a revolt ! " exclaimed the ill-fated monarch. *' Sire," replied, "it is a Revolution."
A Revolution indeed: or, rather, the Revolution of these latter days: the greatest which the world has experienced for well-nigh two thousand years, and which therefore we are accustomed to speaking of, not inappropriately, without descriptive date or adjective.
The movement which thus received its Heroism of blood and fire has since been manifesting itself to the world. The subsequent history of France is essentially the history of its endeavour "to mix itself with life." This is the movement which, first distinctly formulated in 17S9, and, had free course until, on the 5th of October, 1795,
Napoleon opposed to it those iron floodgates where- by it was, more or less effectually, held in check for five-and-thirty years. This is the movement which, running subterraneously, but, in Royer Col- lard's picturesque phrase, '' with the full stream," swept away in 1830 the throne of Charles X. This is the movement which in 1848 subverted the monarchy of July, and which, thwarted for eighteen years by the Second Empire, and for five years more by the Marshalate, has since borne France victoriously before it.
It is this movement — French, indeed, in its origin, but oecumenical in its influence — which has shaken to the foundation the political order throughout continental Europe, and which aspires everywhere to re-make human society in its own image and likeness.
The French Revolution of 1789 opens a new chapter in the world's history. How are we to judge of it by the experience of the century with which that chapter begins? It is a question of great pith and moment. To read aright the signs of the times is the problem if we would obtain that political instruction which Thucydides accounted the true end of historical research, we must discern ideas in their roots and relations and results. So only can we "from the apparent what infer the why."
It must, indeed, be admitted that we do not know, that we can but dimly conjecture, the secret reasons, the obscure instincts, the confused motives, whereby particular acts of any man were determined. What man knoweth the things of a man, save the spirit of a man that is in him? And even a man's own knowledge of his own mental evolution is usually vague and imperfect.
The Unconscious here counts for a great deal. Still, by the attentive study of a man's deeds and words, we may infer, not unsoundly, concerning his affections, his affinities, his aspirations. Of a nation of men this is also true; nay, far truer, because the manifestations of national character are much more conspicuous and more instinctive— that is less reasoned— than are the manifestations of in- dividual character. It is prominently true of the French Revolution.
In preparing it for the press, I have carefully revised every sentence, and have made such alterations and additions as seemed desirable, in order to bring out more clearly mv meaning-, and to meet suggestions for which I am indebted to various reviewers. That appeared to be the best way of manifesting my appreciation of the favour shown to a volume, which, as I am fully conscious, little accords with the dominant tone of what is called "public opinion."
Download 11 MB PDF book