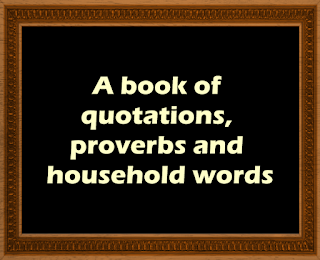 A book of quotations, proverbs and household words; a collection of quotations from British and American authors, ancient and modern; with many thousands of proverbs, familiar phrases and sayings, from all sources, including Hebrew, Arabic, Greek, Latin, French, German, Spanish, Italian, and other languages.
This book is a collection of what is quotable, as well as of what is quoted. Passages have not been included unless they have either proved their right by actual and effective quotation or have seemed likely to be of general acceptability and usefulness, as " words which come home to men's business and bosoms."
The method of arrangement adopted will, it is hoped, commend itself to all lovers of literature as preferable to the plan, sometimes employed in similar compilations, of "classification" under " subject " headings. The best classification is a very ample index, and in this respect "A Book of Quotations" will be found to be most thoroughly supplied. Many excellent handbooks of proverbs, and also of classical and foreign quotations, have already been published, but none, as far as I am aware, with a full verbal index.
Download 46  MB PDF book